Menu
Tampa has made the list of final four cities being considered to host the Republican National Convention in 2012, according to the St. Petersburg Times’ political blog.

No word on who the other finalists might be, but the Salt Lake Tribune reported over the weekend that Salt Lake City also is on the list. Other cities that were believed to have put in bids include Las Vegas, Phoenix, Los Angeles, San Diego, San Antonio, Houston and Indianapolis. I mocked up the chart below to compare the tale of the tape between Salt Lake City and Tampa. 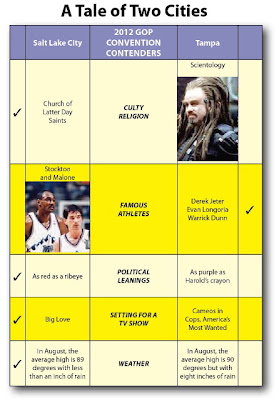 Officials at a remote Nevada prison where O.J. Simpson was set free early Sunday after nine

Officials at a remote Nevada prison where O.J. Simpson was