I’ve been wrong before about Scott Wagman violating Florida’s election laws, so I was much more thorough this time around concerning a possible violation by Mr. Houghton-Wagman.

And while the case has yet to be investigated and ruled on, it appears as if Wagman could be in a heap of trouble with the Florida Elections Commission. The alleged violation:

Upon conducting a search for the term “Jamie Bennett” on Google’s search engine, I was returned to a screen with an advertisement for the Scott Wagman Campaign for St. Petersburg Mayor. 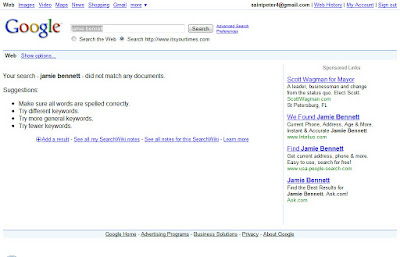 This ad “expressly advocates the election of a candidate” by including the language “Scott Wagman for Mayor”, thereby qualifying the ad as a political advertisement as defined by Section 106.143, F.S.

Accordingly, there should be a candidate disclaimer, but there is not. This ad appears on Google searches from St. Petersburg, Florida, for the terms “Kathleen Ford”, “Bill Foster” and “Deveron Gibbons” — all of whom are Wagman’s competition.

There are other ads similar, BUT NOT EXACTLY THE SAME, as this banner ad. Example 2: 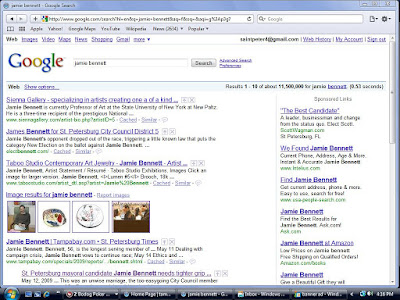 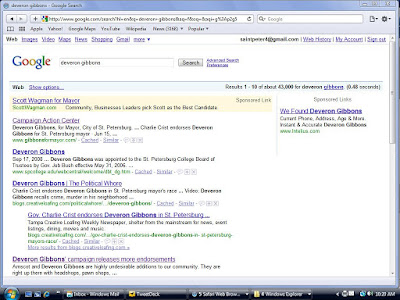 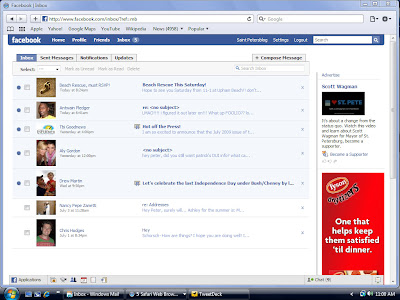 My contention is that each separate ad should be construed as a separate violation, especially since there is no remedy for correcting the omission of a disclaimer. What’s worse is that Wagman’s campaign obviously left off the disclaimer because of spacial concerns, thereby making this a “willful” violation.

So I have filed several complaints with the Florida Elections Commission. So far this election season, I have been right three times and wrong once regarding complaints. I could be wrong here, perhaps there is an opinion I haven’t read. But if I am right about Wagman’s egregious violations, it could end up costing his campaign several thousand dollars. Even to a millionaire, that has to count for something.

Update: So I asked for an unofficial opinion from Gary Holland, Assistant General Counsel for the Florida Department of State. He replied: “I agree the one that says “Elect Scott” is a paid ad that should have a disclaimer.

Update: Received the letter (and made a follow up phone call with the FEC’s Executive Director, who also believes the ads are a violation of election laws.