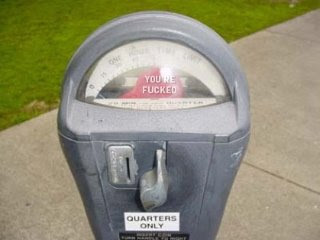 A certain city council member and mayoral candidate once remarked to me, after I complained about the unevenness of the enforcement of the city’s parking codes, that “those meters pay my salary.”

It’s probably obvious which council member said that to me, but it’s unclear who the genius is behind the decision to standardize when meters are policed throughout downtown, from 9 am to 10 pm, seven days a week.

In this economic downturn, when downtown concerns, especially restaurants, are going out of business seemingly every day, this decision is just downright stupid.

Maybe stupid enough for a couple of City Council members to lose their seats? Frank Farkas upset Margo Fischer by making an issue of the city’s parking meters. For example, why can’t Jason Diviki make an issue of this in his bid against Leslie Curran?

In fact, I’m starting to get the same feeling the Romans must have had when Nero left the city with his fiddle in hand. While the crime rate in St. Pete skyrockets, the City Council regulates soothsayers; while Baywalk withers, the City Council is worried about neighborhoods planting community gardens. And now, with Central Avenue going into economic remission, the city decides that what would be best for the businesses on that street is to make it more difficult for people to park.

Something tells me the voters of St. Petersburg won’t stand idly by as City Hall fiddles.