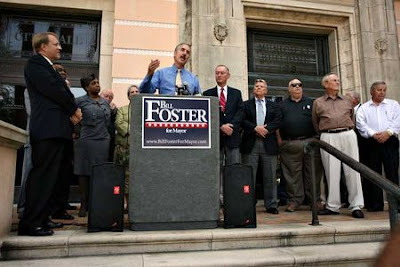 From Sharockman: A press conference is about to begin on the steps of City Hall where Bill Foster is expected to announce the endorsements of Mayor Rick Baker and former mayors David Fischer, Bob Ulrich, and Randy Wedding, among others.

The list apparently moving to the Foster camp after his first place finish in last week’s primary is long and accounts for nearly 40 years in city history.

Among those we’re told are endorsing Foster, a 46-year-old attorney and former City Council member:

Most of the endorsements — particularly Baker’s — should not come as a surprise, and further cement Foster as the establishment candidate. Foster’s roster of supporters now includes every living City Council member who served with Ford, a 52-year-old attorney and council member from 1997-2001.

Check back later for news from Wednesday’s press conference.

UPDATE 11:25 a.m. — The press conference just wrapped up. While we start to put together a story, here’s some quotes from Baker, Foster and Fischer.

Baker: “We still have challenges. I understand that more than anybody else. City building is an ongoing effort. You never finish the job. There is more work to be done. Bill Foster has the experience to do that. He’s got the commitment to do that.”

Fischer: “Bill Foster, we’ve seen him in action. He’s the right guy to move us ahead.”

Foster: “I can bring to the table all of these experiences, over 40 years of institutional knowledge, historic knowledge of the city.”

No one took a direct shot at Ford, though Baker did bring up temperament during his remarks. Temperament was his code word in the 2001 campaign to describe Ford as divisive.