Menu
The Times’ John Frank writes: “With the economy in the tank, a Florida lawmaker is considering an unusual idea to raise money: Let corporations pay to put logos on license plates.

The idea of a letting corporations like Disney or Nike sponsor license plates is being floated by state Sen. Mike Fasano, a New Port Richey Republican and transportation budget chairman.

“We were asked to come up with new innovative ways to save taxpayers money,” Fasano explained. “I figured why not give it a shot and see if people are interested. I think it’s a fun choice.”

The legislation, which is still being crafted, would generate money for the state but use some proceeds to give drivers a discount on annual registration fees if they get a corporate tag.

Here’s my example showing why this is stupid idea: 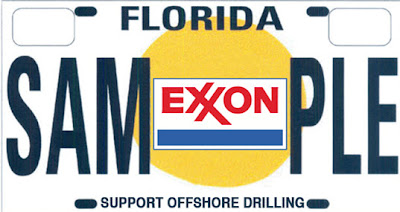 Eventually, that is what Florida’s license plates would come to look like, because if you allow one corporation to sponsor a tag, the state pretty much has to let any corporation do so.

Of course, Florida already lets corporations all but sponsor campaigns and elections, so letting them emblazon license plates should come easily.

For July’s charity-of-the-month, the five offices of Pasco County Tax Collector Mike Fasano will be collecting