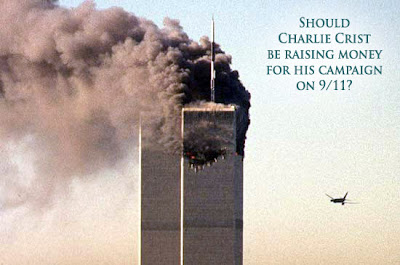 If appearances matter, an upcoming fundraiser for Gov. Charlie Crist will generate some buzz. Not only is the fundraiser being held on the 8th anniversary of the Sept. 11 terrorist attack, but the host gave more than $30,000 to Barack Obama.

An invitation lists the fundraiser at retired entrepreneur Fazal A. Fazlin’s waterfront mansion in St. Petersburg. The entrance fee is $1,000 or $2,400 for a VIP meet and greet and photo with the GOP U.S. Senate candidate.

FEC records show Fazlin gave about $35,000 to Obama last year and he dotted his lawn with Obama for President signs. Fazlin, though, is also a big contributor to Republicans and before settling on Obama he supported Mitt Romney and Rudy Giuliani. Fazlin has an interesting story, told in this New York Times column.

Update: According to several members of the host committee for this event, fundraising is going very slow. “Charlie has gone over these donors three or four times already,” said a promonent Republican donor. “The well is dry.”

It went downhill fast. The first St. Petersburg mayoral campaign forum to include all the candidates

Holding photos and reading names of loved ones lost 16