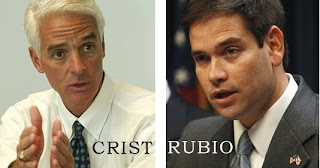 The Florida Senate race is red hot tonight, with leaks, accusations and counter-accusations.

Former Florida Speaker of the House, Marco Rubio, is under fire for charging personal expenses to the Republican Party of Florida.

The Miami Herald reports Rubio charged personal expenses such as grocery bills and repairs to the family minivan to his RPOF American Express card.

The Rubio campaign didn’t dispute the charges on the whole but rather went on the offensive immediately, accusing their opponent in the GOP Senatorial Primary race, Governor Charlie Crist, of leaking the story to the press.

Rubio lashed out at the Crist campaign in a letter to the current Speaker of the Florida House, saying it is clear the documents “were leaked to the media by the Crist Campaign. These actions are an appalling act of political desperation.”

The Crist campaign has steadfastly denied any involvement in the leak. The governor himself spoke to reporters about the story today, seeming to welcome the younger Rubio to hardball politics, “The people have a right to know how people spend their money, how they comport themselves, how they conduct themselves before they put themselves up for public office. That’s happened to The Speaker [Rubio]. He apparently doesn’t like it. That’s too bad. Welcome to the NFL.”

Crist backers claim Rubio has a long history of using his public office for private gain and say his loud protests and accusations are just part of an effort to obscure an embarressing story.