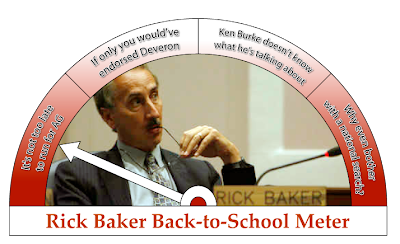 From the Jeffrey S. Solochek: St. Petersburg College’s presidential search commitee is beginning the process of naming finalists for the college’s open presidency.

Of course, the real story is if former St. Petersburg Mayor Rick Baker will be among the finalists.

After a first ballot, Baker is third among eight semifinalists, behind Thomas Keegan and Bill Law.

The committee has said it plans to name 3-5 finalists, but could lower the number. Stay tuned.

UPDATE – This has turned into one bizarre meeting. Trustee Deveron Gibbons, who recused himself from the decision making process because he said he was close friends with Baker, told the search committee not to include Baker among the finalists.

Then the committee apparently did just that, voting 7-6 to support only two finalists. But, the vote was either miscounted, or someone changed their vote.

A motion to send three finalists, including Baker, then failed 7-6.

Then the committee agreed to include Keegan and Law as finalists, then to vote on the other candidates again. That vote seems to have included Kaye Walter as a finalist — she got seven votes in the second round, Baker got the same six.

The committee isn’t quite sure what to do next.

But what’s obvious is this meeting isn’t about who the finalists will be. It’s about whether Rick Baker will be one of them.

UPDATE – The play-by-play of how Baker was eliminated:

Committee members voted verbally for their top four selections. The first vote turned up Keegan and Law as majority choices with 11 votes each from the 13-member panel.

“I’ve never seen such a process designed around who we keep out,” said Welch. “This is a decision to be made by the board of trustees. Let’s have some civility. I’ve never seen this much shouting from an audience.”

A motion to send two candidates to the board initially passed but on a second count of the voting it failed by a 7-6 vote.

Committee member Ken Burke suggested voting on the top two among the third through seventh candidates, which passed on an 11-2 vote.

That vote resulted with Walter receiving seven votes and receiving the third finalist selection. Baker and Gastenveld picked up six votes each.

Another motion to break the Baker-Gastenveld tie passed, which resulted in a 7-6 vote for Gastenveld.

UPDATE – Baker is out, by a 7-6 vote. For continuing updates, visit The Gradebook.

UPDATE – Aaron Sharockman reports: Deveron Gibbons said: “I think it is very clear that two people are way out in front of the rest of the group. Lead today and send a clear message.”

“I’ve never seen a process with so much focus on who to keep out,” said Pinellas County Commissioner and search committee member Ken Welch.

UPDATE – Just got word that Rick Baker is hosting a Meet-and-Greet for Charlie Crist Saturday morning. Crist will be in town to preside over the investiture of Judge Thomas Minkoff.