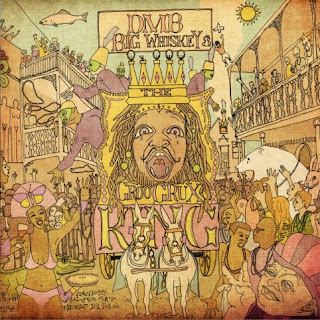 From Ants Marching: Dave Matthews Band Big Whiskey and the GrooGrux King is officially Platinum. It took a bit longer than the previous album, Stand Up, to reach the million sales plateau, but that’s not exactly a measure of its success. Factoring in the economy, and the ease of torrents (you know who you are that downloaded it), and the fact that the entire album – albeit a different cut – leaked to the Internet a week before the release, it’s not doing too shabby.

After the catchy You and Me hits the radio airwaves, there will probably be a bump in sales. Meanwhile, Why I Am and Funny The Way It Is are still doing quite respectable on radio. Not sure how Why I Am isn’t doing better, but that’s for a different news item to tell people to call their radio stations and play the song that is arguably the best song released by DMB since Grey Street.

Lets not forget that critics liked the album (as we did). So don’t think that just because it didn’t surpass sales of past albums in the same time frame that this album isn’t doing good. Speaking of good, the tour promotion of Big Whiskey and the GrooGrux King, off to great reviews by fans so far, continues August 29 in San Francisco.