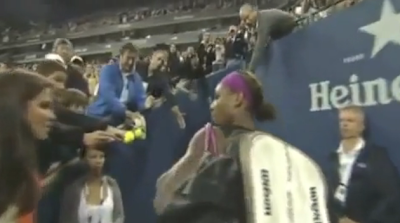 From Straight Sets: Amid all the action of a huge day in tennis, the big lingering question at the United States Open is if further discipline will be meted out for Serena Williams’s match-ending tantrum in the semifinal match against Kim Clijsters Saturday night.

Normally there would be no hurry to make a decision, but Serena and Venus Williams have made the women’s doubles final — scheduled to be played Monday — and one of the possible decisions by the U.S.T.A. could be to suspend Serena for the remainder of this tournament, costing the Williams sisters their chance at a doubles title.

The other options for the U.S.T.A. or W.T.A. would be a fine or a suspension that would not kick in until after this tournament ends.

The W.T.A. rules allow for fines or suspensions because of on-court violations of the tour’s code of conduct, but only specifically mentions suspensions in other events of the same tournament when a player is defaulted because of bad behavior. Williams was not defaulted but simply issued a point penalty and that penalty happened to come on match point. Open officials were explicit in explaining that after the match.

Here’s the video of the whole incident:

Out of sorts and out of answers, defending champion Serena Williams is out of the Rio

A Tampa billionaire is accused of running a scam after

Day 9 of the Rio Games features medal action in