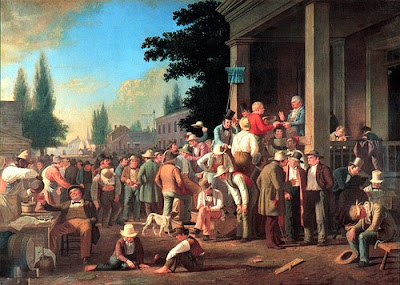 The County Election pictures the American democratic system in progress. The story takes place in a small Midwestern town in the mid-nineteenth century, when the rituals of voting were still taking shape, particularly on the frontier. George Caleb Bingham, known as “the Missouri artist” for the state where he lived and worked, recognized the responsibilities as well as the rights of citizenship; and because he played an active part in Missouri politics, he gained a personal perspective on the contemporary electoral process. In The County Election, Bingham presents a raucous voting party as an enactment of democracy, bringing together a variety of residents in a rural community to make decisions for the common good.
All of yesterday’s updates are after the jump: 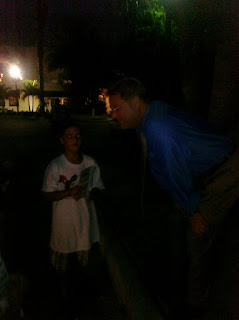 6:16 p.m. – The Pinellas Supervisor of Elections reports that, as of 6 p.m., turnout in the St. Petersburg municipal election is 13.33%, not including 14% in early ballots already returned. 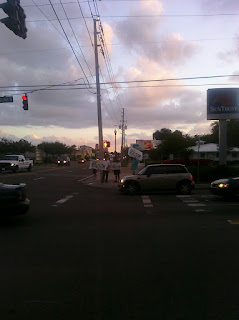 4:13 p.m. – The Pinellas Supervisor of Elections reports that, as of 4 p.m., turnout in the St. Petersburg municipal election is 10.23%, not including 14% in early ballots already returned.

4:07 p.m. – Consultant Gregory Wilson just commented: “Seeing the lackluster turnout, and sensing a stronger Ford GOTV effort (except for Foster’s truck, of course), I revise to say Ford squeaks by Foster. But, in candor, predictions aren’t what I do.” 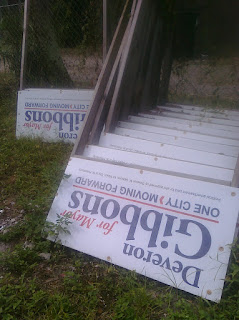 3:54 p.m. – Jim Harper, a former editor of the Weekly Planet (now Creative Loafing), who covered St. Petersburg government, politics and racial issues from 1996 to 2000 for the St. Petersburg Times has a must-read article about why he’s voting for Kathleen Ford.

3:52 p.m. – The real African-American in charge, Jeff Copeland is predicting a very close win for Foster.

2:15 p.m. – The Pinellas Supervisor of Elections reports that, as of 2 p.m., turnout in the St. Petersburg municipal election is 8.03%, not including 14% in early ballots already returned.

1:54 p.m. – St. Petersburg Times media critic Eric Deggans twittered me to say he will be watching election results tonight because he has already seen the premiere of V. You can read his review of this highly-anticipated miniseries here.

1:47 p.m. – How smart is Jack Latvala? He’s got his workers, including staffers from the Republican Party of Florida, collecting signatures at several polling locations to place his name on the 2010 ballot. Why isn’t Nina Hayden (or Kendrick Meek) doing the same thing? 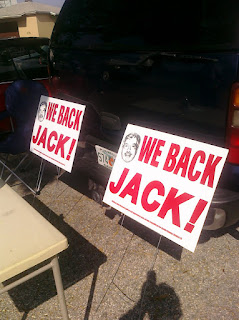 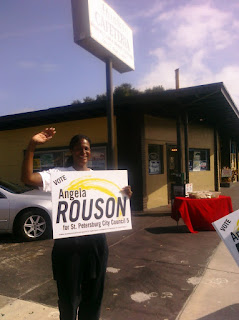 1:01 p.m. – Just ran into DEC Chair Ramsay McLaughlin at Sunken Gardens (Precinct 160). McLaughlin, who deserves a lot — I mean a lot — of credit for making the DEC a force in this year’s election, predicts a Ford win by four or five points.

12:29 p.m. – Darden Rice, campaign manager for Karl Nurse, predicts a four point victory for Foster, and a Nurse victory with 61% of the vote. Darden, you are being way too cautious!

11:45 a.m. – Just finished up a discussion with Karl Nurse at the Sunshine Center, where I grabbed this pic of a firefighter canvassing for Ford and Rouson. The Firefighters now seem to be out in force. 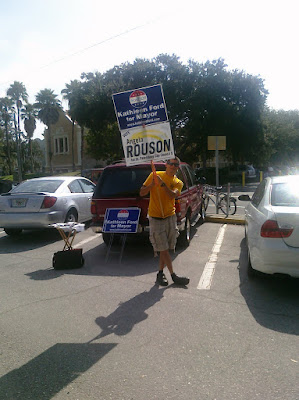 11:13 a.m. – Pinellas Stonewall Democrat David Schauer thinks because so many of the absentee ballots came in early that Kathleen Ford has an edge. He also predicts Karl Nurse will win more than 70% of the vote, Steve Kornell will edge Angela Rouson and Danner and Curran will win, but with less than 60%.

10:51 a.m. – Creative Loafing’s Mitch Perry writes “If Ms. Ford is victorious tonight, a sure loser other than her opponent will be (the) editorial page (of The St. Petersburg Times).

9:58 a.m. – Have Will Newton and the St. Petersburg Firefighters abandoned the Ford cause? The Firefighters had a significant presence at polling places in the primary, but it’s hard to find one today.

8:42 a.m. – Jim Kennedy’s campaign manager Johnny Bardine (shout out to Johnny for righting the ship) predicts his guy will win 54-46.

8:19 a.m. – From up-and-coming reporters Boyle and Nipps: City Council member Jamie Bennett, who lost a bid for mayor in the primary, went to Lakewood United Methodist Church on 60th Ave S before 8 a.m. to cast his vote. Bennett wouldn’t say who he voted for. “I didn’t endorse anybody, but I did my part and voted,” he said. But he did comment on the turnout at his polling place, which he said “certainly isn’t Obama-level.” “A year ago at this time, you couldn’t find a parking space here,” Bennett said.

7:46 a.m. – The next, next Mayor of St. Petersburg, Pinellas Commissioner Ken Welch, predicts “Ford wins a close one.”

6:12 a.m. – Take a look at the Pinellas County Supervisor of Elections’ website. Almost 2,000 ballots were returned over the weekend.