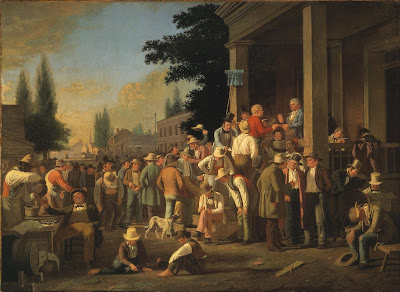 In The County Election, the artist presents a raucous voting party as an enactment of democracy, bringing together a variety of residents in a rural community to make decisions for the common good.

In this crowded composition, Bingham suggests the inclusiveness of a democracy with representatives of every age and social stratum—except, of course, African Americans, who would not enjoy the right to vote until after the Civil War, and women, whose right to participate would not be recognized for another seventy years. The painting reveals other irregularities in the electoral system that would not be tolerated today.

Because there was no system of voter registration, the man in red at the top of the courthouse steps swears on the Bible that he hasn’t already cast a vote. Because there was no secret (or even paper) ballot, a voter calls out his choice to the election clerks behind the judge, who openly record it in a ledger. Because there were no restrictions on electioneering, the welldressed gentleman behind the voter—evidently one of the candidates—is free to hand his card to citizens just before they cast their vote. Yet none of this appears to dull the spirit of the voting process.

Today is Election Day in many municipalities. On average, 15% to 20% of citizens vote in municipal elections.

We could say a lot of things about low voter turnout, but let’s focus on these two things. If one person in five or six votes, those who vote have a lot of say over the end results. Secondly, low voter turnout means short lines and a quick in and out at your polling location!

Think about all the services your city government is responsible for providing: Roads. Fire rescue. Police. Parks. Recreation. Growth management. Solid waste and recycling. Do you care about these things? Of course you do. So here’s the plan:

Find out who’s running and where to vote. The Supervisor of Elections has an easy-to-use Precinct Finder that will tell you who’s up for election in your city, and where your precinct votes.

Talk about the candidates with your friends and family to get a better feel for who they are and what they represent. Those of you with political aspirations might be interested to know that elections in many Tampa Bay cities are uncontested!

VOTE in your city election on Tuesday, March 9, 2010! Leave us a comment on Tuesday and let us know how long it took you, from the time you left home/work til the time you got back.

That’s it! In exchange for an hour of your time, you can affect your city’s services over the course of a year or longer.

Have a question about the upcoming municipal elections we didn’t answer here? Need to know how to register, or how to obtain an absentee ballot? Ask me in the comments section and we’ll answer promptly.

If you would have told Denise Grimsley in December she