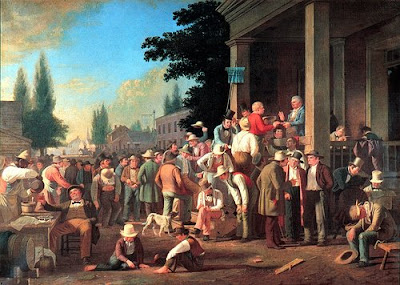 “Let each citizen remember at the moment he is offering his vote that he is not making a present or a compliment to please an individual–or at least that he ought not so to do; but that he is executing one of the most solemn trusts in human society for which he is accountable to God and his country.”That quote is some pretty heady stuff from Mr. Samuel Adams (who I believe fought the British for the right to distribute Octoberfest beer here in America), and it may be a little over-the-top for such provincial matters as elections in Gulfport, Dunedin, Safety Harbor, Seminole and other Pinellas beachcombers, but elections have consequences, even small-town races for mayor or city commissioner. So I urge any gentle reader of this blog who lives in a city with an election today to not only head to the polls themselves, but to bring at least one friend with them so they may cast their own ballot.

What happens in your city hall is probably more important now than any other point in your lifetime. Facing enormous budgetary challenges, city leaders are on the front lines of the economic battle. Who you elect to fight for you in today’s times is a major decision. The days of part-time leadership spent mostly on Chamber of Commerce meetings and ribbon-cuttings are past, replaced by fifty-hour work weeks requiring these elected officials to do more than ever with less than they have ever had.

The importance of these local elections appears to be recognized by local voters. Early voting turnout in Pinellas is so high that in some cities, the number of ballots already returned before the so-called Election Day is greater than the overall turnout of previous elections.

How important are these elections? Consider former Republican state representative Leslie Waters. She was termed-out of office two years ago, but decided to run for the Seminole City Commission this year, campaigning on the theme that what happens in city hall is now more important than what happens in Tallahassee. Remember, all politics is local, only now more so.