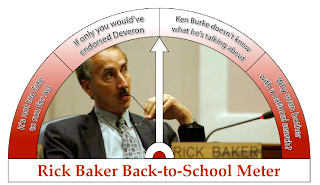 Even though former Mayor Rick Baker is among nine semifinalists to be the next president of St. Petersburg College, I am downgrading the Rick Baker Back-to-School Meter because Baker is “the lone candidate without higher education experience. He failed to win the support of the search committee’s three faculty representatives, who each backed other candidates.” The leading vote-getters among the search committee were Thomas Keegan, 51, president of Peninsula College in Washington and Bill Law, president of Tallahassee Community College. Law, 61, served as a vice president at St. Petersburg Junior College from 1981 to 1988.

For my money, Bill Law would make the best choice to be the next president of St. Petersburg College. And as the application process moves forward, I think Law will become the de facto choice of all those, such as SPC trustee Ken Burke and the faculty members of the search committee, unenamored with Baker’s application.

The next step for semifinalists is to answer three questions on video for the search committee to review. The committee intends to send three to five finalists to the college’s Board of Trustees in February, with the idea that a new president could be selected by the end of March.