(UPDATED) Labor Day 2017 got off to an early start in Tampa, with more than 120 activists joined striking McDonald’s employees calling for a $15 living wage and a union for fast-food workers.

The protest outside the McDonald’s near the I-4 entrance/exit in Ybor City was one of 300 scheduled around the nation for Monday.

“A union will speak more for me because I’ll have someone to speak for me, so I can get more money,” says 57-year-old McDonald’s worker Gale Rogers. “It’s a struggle here. No benefits, no sick time, no vacation. We need to survive. We’re living in poverty.”

Rogers is a widow who bikes four miles to the fast-food establishment five days a week, in the overbearing heat and humidity and the rain. She has a car but says she can’t maintain the insurance on her salary. She also called on her co-workers inside the McDonald’s to join her.

Bobby Fields was one of her colleagues who joined in Monday’s strike. Turning 32 on Tuesday, he’s worked at the Ybor City location for over nine years, and now makes $8.70 an hour.

“What I’m making right now is not enough to get past our rent,” he said.

The protest began at 6 a.m. just underneath the I-4 overpass on East 13th Street. It was followed by a march around the restaurant before activists gave short speeches.

There was a heavy police presence in the area, with more than a dozen Tampa Police Dept. cars in the area and probably more than two dozen officers hovering around the protest.

And there were some political candidates in the crowd, including Hillsborough County Commission hopeful Elvis Pigott, school board hopeful Jessica Vaughn and Ahmad Saadaldin, running as a non-party affiliated candidate in the special election for House District 58 in December.

“I believe in Fight for $15 because no one in the wealthiest nation on the planet should be living in poverty!” Saadaldin told the crowd through a megaphone.

The protest was taking place as unemployment has hit a 16-year-low, and employers are looking to hire. The Fight for $15 movement began in 2012, fueled in recent years by the Service Employees International Union.

In June 2016, McDonald’s issued a statement on the Fight for $15 movement.

“At McDonald’s, we take seriously our role in helping strengthen communities. Every year, we and our franchisees separately employ hundreds of thousands of people, providing many with their very first job,” said Lisa McComb, a McDonald’s spokesperson. “We offer McDonald’s employees the opportunity to develop the valuable skills and work ethic necessary to build successful careers even beyond our restaurants. Last July, we raised wages for all employees at our company-owned restaurants to $1 above the local minimum wage and gave them the ability to earn paid time off. And because so many are just starting out in their careers, we invest in Archways to Opportunity, a set of programs for everyone that provides free high school completion courses and college tuition assistance so they can work toward earning a high school diploma or a college degree.” 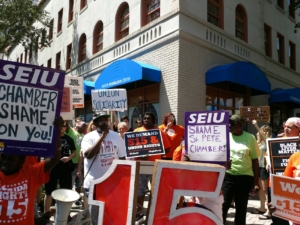 At noon, the Fight for $15 activists held a press conference in downtown St. Petersburg, just a few feet away from the offices of the St. Petersburg Chamber of Commerce.

The Chamber has called on the city to hold off on passing legislation that would ultimately get contracted workers with the city to get a $15 wage by 2018-2019.

“We’re not a progressive city, but we want to be,” said 909 Gallerie 909 owner Carla Bristol. “This is one of the ways that we can get there. Help us fight for $15 for every contract worker and part-time worker for this city. That’s what we’ve been asking for. That’s what I belive city council will approve, and I believe the chamber is simply creating a delay at this point.”

The federal minimum wage has been stuck at $7.25 since 2008. Democratic efforts to raise that have been unsuccessful both nationally and in Florida, where the minimum wage is at $8.10.

Mark Nash, a member of the Hillsborough County Democratic Executive Committee, has filed to run for

Mark Nash, a member of the Hillsborough County Democratic Executive

Another wave of mailers went out in Hillsborough County blasting