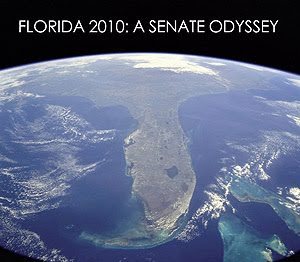 I swear Florida is cursed. Cursed in the way, the Trojans were cursed by the gods and forced to endure ten years of war because of Paris slurping on Helen. Florida slurped on George W. in 2000 and it’s been hell ever since, as if Zeus and Poseidon were just sitting around, like they did in Clash of the Titans, coming up with ways to torment the state.

The latest Herculean task facing our state is replacing Mel Martinez in the US Senate. Here is the latest, in case you missed anything, which you would be forgiven for because it’s easier to follow the Iliad:

Crist and Martinez, a close confidant who helped oversee the governor’s transition into office, talked for about 45 minutes at the Signature Flight building near Miami International Airport.

Bloggers for Change believes Democrats already having an established candidate in Charlie Justice, in the event Crist picks St. Petersburg Congressman Bill Young, who is getting the hometown push from the editorial board of the St. Petersburg Times.