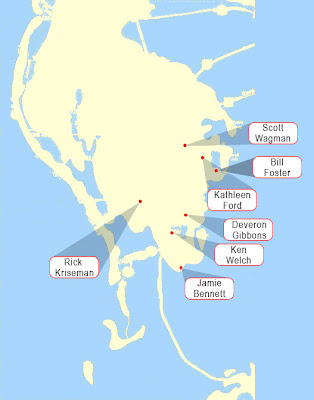 I realize there has been a lot of discussion about the possibility of County Commissioner Ken Welch entering the race for Mayor of St. Petersburg, but there is still an 800- pound gorilla out there: Rick Kriseman. If Representative Kriseman runs, Welch has stated he would not run — and vice-versa. I think there are significant factors that would influence a Kriseman run, geography and timing. The former points to a Kriseman run, while the latter does not.
–
Just looking at the map to the right of the city and where each candidate resides, you can easily see that Rick Kriseman has west St. Petersburg all too himself, while the rest of the candidates share their geopgraphic base with at least more than one opponent. Rep. Kriseman could never step across 34th Street and still make it out of the primary, so long as he takes care of his backyard.
–
If Kriseman doesn’t run, I think that helps Jamie Bennett the most, even if Ken Welch does get into the race. Arguably, Bennett would then have the far south and western parts of the city to campaign in while central and northeast St. Petersburg get divided up among a slew of candidates.
–
See, I still don’t think Kriseman gets in, even if he does have a strong starting hand to play. The calendar just doesn’t provide enough time for him to raise enough money and be in St. Petersburg enough to beat the other strong candidates. He has only six weeks until the legislative session begins and when it does, he can no longer raise money for any campaign, even for a municipal office. Let’s assume that Rep. Kriseman is not going to decide to run until after Commissioner Welch makes his decision at the end of the month. So that will leave Kriseman with less than a month to get organized for a citywide campaign. That’s not going to happen.
–
That means Representative Kriseman, at best, would be able to start campaigning in earnest in the middle of May. That’s four and a half months to the primary, you say. Wrong. Absentee and early voting begins in late July, just two months after Representative Kriseman returns from Tallahassee. I won’t put much past Steve Shale, but I don’t think he can even position Rick ahead of five other candidates in only two months time.
–
My bet: Rick Kriseman remains in his House seat for the remainder of his term.
Tags: absenteeearly votingHouse seatJamie BennettKen WelchmayorRick KrisemanSt. PetersburgSteve Shale