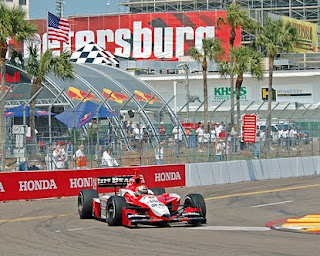 Maybe it’s the economy, maybe it’s the weather, but, I can’t help but think that as the Grand Prix of St. Petersburg zooms into town next weekend, there is little buzz, or should I say roar, about the event.

Actually, I don’t think the sagging economy can be blamed for the lack of excitement. Nor is the depressing weather the main reason why interest in the Grand Prix seems dampened.

No, the real reason the Grand Prix of St. Petersburg is running in low-gear is because it’s lost it biggest cheerleader, former Mayor Rick Baker.

Baker shepherded the Grand Prix from near insolvency to a mid-major sporting event. The Grand Prix isn’t the Rays hosting the World Series, but it was an entire weekend to showcase the beauty of St. Petersburg’s waterfront.

But without Baker around to champion the event, this year’s Grand Prix seems like an afterthought. Admittedly, the weather around here hasn’t been great. In fact, the cold and rain which has plagued the city for much of January and February forced the cancellation of last weekend’s Pit Lane Block Party, a precursor to a week of pomp and circumstance surrounding the race.

But if Baker were still a Mayor, I don’t think it would matter if there was snow on the ground. You’d be hearing more than just the roar of the engines this week.

So how does Luke Del Rio feel about a little rain? Del Rio, the University of

So how does Luke Del Rio feel about a little