Menu
Alright, the editors and managers at The St. Petersburg Times‘ website www.tampabay.com are asking readers for ideas on how to improve their site. 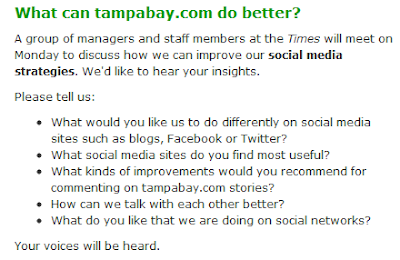 Well, ask and you shall receive, because if there is one thing I ain’t lacking, it’s opinions on how to improve the Times‘ online presence.

Now, I understand there are casual readers of www.tampabay.com who are probably satisfied with the Times‘ website — and they should be. The site is accessible and full of information, the two things you want in a news site. I also understand there are aspects of the Times‘ coverage that I have no real interest in, such as the Homes section, so I’ll leave improving those sections to those who know better.

But there are online sections of the newspaper that are so behind the times, no pun intended, that there is no hope for them without a complete overhaul. I am speaking specifically of the Sports section. No one my age goes online for sports information and types in tampabay.com. There is just no comparison between what ESPN does and what the Times offers online. And now that ESPN is expanding its hyperlocal coverage to four cities, regional news outlets like the Times need to seriously re-think its model for online sports coverage.

My suggestion? A completely separate domain for local sports. The Times should stake out this ground now before ESPN gets here. Look at how amazing ESPN’s site is compared to the Times’ sports section. It’s not even a competition. That’s because sports news doesn’t fit in the same delivery framework as other news coverage. Unless the Times adapts, ESPN will be here in three years (at the most) to dominate local sports coverage.

The second revolutionary step the Times needs to take is to offer some sort of competition to Craig’s List. Craig’s List is killing local newspapers, so why not do what Microsoft does and just assimilate the competition into the fold? Build a comparable version of Craig’s List right on the Times‘ site, allow print advertisers to appear in both the daily product and online and then sell advertising to the “Times’ list” to all of the advertisers who have left the newspaper over the last five years.

Just these two steps alone would not only make the Times more money, but would make it relevant.

Now, for the issues that bother people like me, the devout reader of www.tampabay.com.

One of my major issues with tampabay.com is its issues of inconsistency concerning interaction. Specifically, there are just too many options for readers to comment on stories. Wait, you say, isn’t it advantageous to allow readers as many options as possible, especially when it comes to offering their opinion. Well, no, not really, because what the Times really wants to do is foster a debate, in order to improve the coverage and to bring readers back to the website after they have initially read the story.

This speaks to a particular point of contention of mine: the entire system for commenting throughout www.tampabay.com. Almost all of it is anonymous, leading to continuing instances of possible libelous commentary making it online throughout the Times‘ website.

The Times‘ needs to institute a registration policy for commenting on tampabay.com just like every other major website, media site or not. Registration needs to be linked to an active e-mail that can be verified, with captchas and all sorts of other hoops for commenters to jump through. Then get the commenting system centralized so that readers can take in all of the comments written about a story, not just what is posted at the end of the article or on a blog.

Speaking of blogs, there has to be a better word for blogging when it is done by paid professionals. Eric Deggans doesn’t blog. Adam Smith doesn’t blog. They are professional journalists held to unbelievably high standards. I am a blogger and I have no standards. So to label Deggans’, Smith’s and other journalists’ work as blogging throws them into the gutter I occupy.

That said, it’s time to circulate a memo amongst the writers who do blog to implore them to get more involved with the blogging community. Currently, the system is very vertical, with the mainstream media looking down on the blogosphere, even though they participate in and benefit from it. A writer like Deggans posts something on his blog, then the blogosphere links to it and comments on it, yet Deggans (and I’m sorry to use him as an example because he’s actually good about this kinda thing) doesn’t reach out to the blogosphere or other online media outlets.

This type of online news model is working with great success at sites like Talking Point Memo and Politico. The Times, as an institution, is still well above anything like Politico, but that’s now. I believe the editors and managers are asking for input because they see the writing on the wall, but they also know the Times’ brand is without peer in this market, amongst all companies, not just media outlets.

But that is today. Online is about tomorrow.

Angry at the NFL players who refused to stand during the national anthem, about fifty people

For the second straight week, the University of South Florida Bulls will play at home in

Angry at the NFL players who refused to stand during