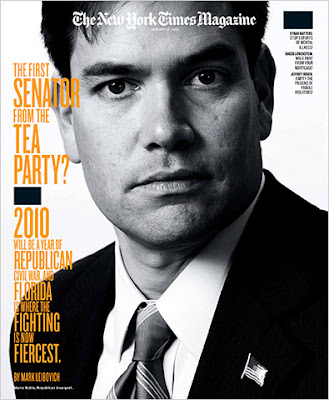 The fiery Senate primary race between two Floridia Republicans will be the cover story for this Sunday’s NYT Magazine. That would be former House Speaker Marco Rubio and Florida Gov. Charlie Crist.

An excerpt from the article: “It is not uncommon for a party out of power to undergo an identity crisis and an internal bloodletting, and it is [Florida governor Charlie] Crist’s bad luck that his race in 2010 fits the frame of a philosophical debate that has been fulminating in the Republican Party for several months. The race, and the national debate, pits the governing pragmatists against the ideological purists.”

The fiery Senate primary race between two Florida Republicans will