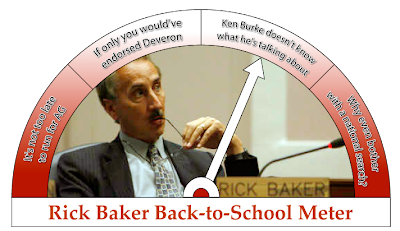 With only eight more days until St. Petersburg’s municipal elections, you may want to prepare yourself for the eventual sense of campaign (and blog) withdrawal.

What ever will we blog about? Oh, I don’t know, maybe the most exciting Senate campaign in the country? A slew of competitive congressional and legislative races? The new Ford administration? I doubt we’ll run out of topics (even if I am expanding into bigger and better things; more on that later).

One topic sure to dominate the local news section is Who Will Be The Next President of St. Petersburg College. Right now, there is only one candidate for the job: Mayor Rick Baker. But will he end up in the position? Or will the Ghosts of Politics Past come back to haunt him. 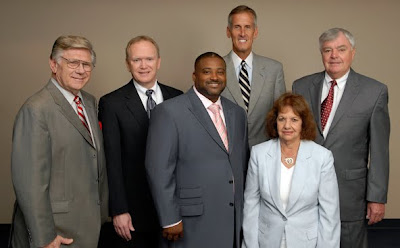 Right now, the Back-to-School Meter rates Baker’s chances of landing the SPC presidency as “Ken Burke doesn’t know what he’s talking about” because it’s about 2.5 to 1 that Baker lands the position. Deveron Gibbons said he will recuse himself from the vote. As it stands, SPC trustee Ken Burke has said he doesn’t think Baker is the right person, while trustee Terry Brett will likely vote for Baker. Dick Johnston is leaning for Baker, but is not certain, and Evelyn Bilirakis is reportedly undecided. But the most important news is Baker’s recent announcement that he is interested in the job.

Keep checking back for the latest developments on Rick Baker’s job search. After all, what else are we going to talk about after the creationist and the racist go away.