The following is cross-posted with permission of Noah Pransky’s Shadow of the Stadium blog. 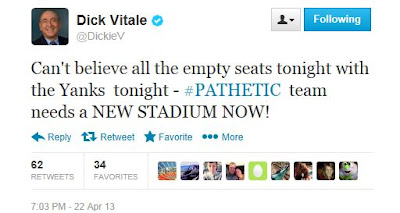 In fact, through the first three-plus weeks of the season, the Rays rank 22nd in the league in attendance with 21,904 a game. That’s down about 1,100 from the same point last year, but the entire league average is down as well.

The Marlins, 27th in the league, are down 10,588 fans a game to just 19,586 on average – right in line with Maury Brown’s bold 2013 prediction that the team would fail to sell out a single game and mark the biggest second-season drop in modern stadium history.

Seattle, with its great stadium, stadium location, and fireballer Felix Hernandez, is down a few thousand from last year to just 18,532 a game.

And Cleveland, benefitting from better April weather, is actually up a hair from last year, drawing 15,195 per game.

It’s a good thing MLB is relying more on television revenues this year because it seems the league’s trend of setting attendance records each season may be coming to an end. Either way, it would be a safe bet to say the Rays’ will be able to stay out of the league’s attendance cellar in 2013.