Kendrick Meek’s effort to qualify for the ballot by petition is dangerously behind where his campaign says it is, according to a real-time sampling of the ten Supervisor of Elections’ offices which have, to date, processed more than 85% of Meek’s verified signatures.

In a conference call two weeks ago with a pool of new media writers and bloggers, Meek’s campaign manager, Abe Dyk, responded to a series of questions about the campaign’s signature-gathering efforts. Dyk would not (and has not) talk(ed) specific numbers about where the campaign stood in its effort to collect more than 112,000 signatures from registered voters by March 29, 2010. Pressed for at least an assessment of the campaign’s signature-gathering efforts, Dyk stated that “more than half” (that would be 56,000) of the required number have been collected.

Yet, according to the Florida Division of Elections only 14,873 petitions have been verified as of January 20. I wrote last week that Dyk blames this low number on the fact that the campaign has a “backload” of thousands of petitions still waiting be processed into the campaign’s database. Of course, Dyk said the same thing in November to the St. Petersburg Times:

“There has been a huge data entry back log in our campaign,” he said, noting that the campaign uses much of the data gathered in the petition drives to track and organize volunteers and supporters. “We need to go through each petition and pull that information out and put it into a data base.” Dyk estimated that the campaign has gathered more than half of the required signatures, but has yet to turn them in to elections officials.

The day after the conference call, my blogging colleague — and Meek’s new media director — Kenneth Quinnell followed up a post I wrote about Meek’s sisyphean task by calling and e-mailing to say that, not only has the campaign collected more than half of the required number, it has already turned in 40,000 signatures to the various Supervisor of Elections throughout the state to be verified.

To understand the numbers, it’s important to understand that ten counties — Alachua, Broward, Escambia, Hillsborough, Leon, Miami, Orange, Palm Beach, Pinellas and Volusia — currently account for 12,312 (86%) of the 14,873 verified signatures, as found on the Florida Division of Elections website.

Also, keep in mind that not all counties Supervisor of Elections’ offices are created equal. Some are on top of the verifying game, some lag behind. For example, Broward and Miami-Dade counties have not had their status updated with Division of Elections since August and September, respectively. So what was needed for a true assessment of Meek’s efforts was a few phone calls to the various Supervisor of Elections.

In Miami-Dade, Meek has collected about 6,000 more petitions since the county last updated to the Division of Elections in September; in Broward, Meek added another 2,300. Hillsborough and Orange Counties were good for another 1,000 petitions. But in many of the other highest-performing counties — Alachua, Leon, Pinellas, Volusia, no new petitions have been turned in since the initial batches were delivered. 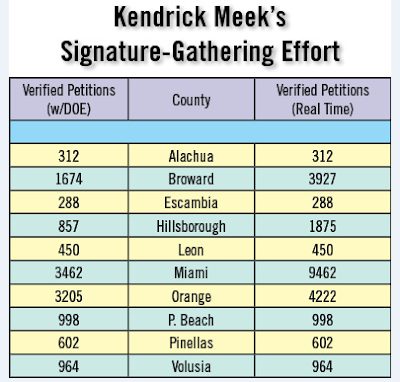 In total, the ten highest-performing counties SoEs offices have verified approximately 23,100 signatures – about 10,100 more than what is reported on the Florida Division of Elections page.

So let’s extrapolate: if the current ratio of petitions gathered in the top-performing counties vs. petitions gathered throughout the rest of the state remains constant at about 86%, that means Kendrick Meek has about 26,600 verified signatures — a far cry from the 112,476 signatures he needs to have verified by March 29.

Obviously, there is a huge flaw in my logic. Perhaps Kendrick Meek’s campaign has and is focused on collecting signatures in the other 57 counties. Nope, no new verified signatures in Duval or Pasco or Seminole. And none of the updated totals for the rest of the counties are so much that they skew the 86% ratio. In fact, the huge numbers coming out of Broward and Miami-Dade indicate the probability that more than 90% of Meek’s verified signatures originate from the ten highest-performing counties.

The bottom line: Kendrick Meek’s campaign has turned in far fewer petitions than what the campaign attests. Furthermore, based on these numbers, the campaign has not collected anywhere near even half the required signatures to qualify for the ballot, as Abe Dyk has stated. Based on my projections, Dyk and Co. would have to be sitting on 30,000 petitions waiting to be data-entered by the campaign — and that would still only get them to the half-way mark.

Also, don’t blame the bureaucrats — there are few “backlogs” at any of the Supervisor of Elections’ offices; I spoke with each of the
supervisors in charge of each county’s verification process and, unless they provided me with a new number, they each said there were no petitions in their offices waiting to be processed. For example, I got this e-mail from the Orange Co. Supervisor of Election:

What do these actual numbers mean for the petition-gathering process? Can Meek still qualify by the ballot by petition? Absolutely! And posts like this will probably only motivate his campaign more. But the task in front of Meek is, as I’ve said, sisyphean. By my projections, the campaign has 26,600 verified signatures in the bank. By that standard, the campaign still needs to get 85,876 signatures verified by the deadline — a pace that equates to needing 1,281 signatures a day (actually, the campaign needs to collect even more than that because not every petition ends up getting verified). 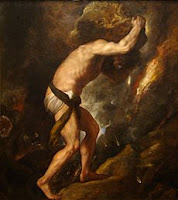 Even if you believe the campaign has some sort of huge “backlog”, say 13,400 more petitions, just laying around various campaign offices waiting to be processed, that gives Meek about 40,000 verified signatures “all day”, as we like to say in the restaurant business. That means the campaign still needs to collect 72,476 verified signatures or about 1080 a day.

How difficult is it to collect 1080 good petitions a day? So far, the campaign has collected 998 signatures in Palm Beach County (it’s fifth highest performing county in the state). Between now and March 29, Kendrick Meek’s campaign has to duplicate its efforts in Palm Beach about 67 more times.

Can this be done? Of course. But right now is the perfect time for Meek to abandon the signature-gathering effort. Meek has courageously taken the lead on America’s rescue and recovery efforts in Haiti after a devastating earthquake all but leveled the country. Meek’s congressional district is home to the largest Haitian population in the US, so Meek, always a doer, has shuttled between the states and Haiti. Of course, he has earned some good press for his efforts, but for Congressman Meek, that’s not what his actions are all about. He’s traveled to Haiti without any fanfare, without an entourage, without any expectation of doing anything else except to help the Haitian people. Kendrick Meek is literally doing God’s work.

And he’s going to have to continue to God’s work for many weeks and months to come. There is just not enough time in the day for Kendrick Meek to be an effective Congressman, a candidate for the U.S. Senate, a miracle-worker in Haiti and a petition-gatherer in Florida. At this point, no one would think worse of Meek if he said ‘Yes, I am still very much running for the U.S. Senate, but, in light of the tremendous problems facing a county many of my constituents hail from, I must abandon the petition-gathering component of my campaign so that I can better focus on the relief efforts in Haiti.’

After all, Sisyphus can only do so much.