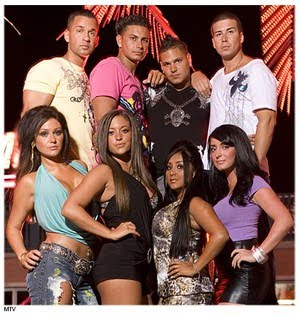 TMZ is reporting that negotiations for the second season of the reality hit, Jersey Shore, have hit a snag.

The unexpectedly popular MTV series has taken the nation by storm, so it’s no doubt they want to continue the magic. Sources close to the contract negotiations are saying that the cast is sticking together “Friends Style” and making sure everyone is paid the same per episode.

What is upsetting the Shore cast? Reality series on MTV that do not pull in the audience that “Jersey Shore” does, such as The Hills, are paying stars $100,000 per episode.

MTV has the Jersey Shore cast under contract for another year, no technically nothing has to change. But these kind of negotiations always happens when shows become hits.

How much do you think the cast should get per episode?

What in the name of Ryan Lochte is going on?  It depends upon whom you ask.

What in the name of Ryan Lochte is going on?

Is Hulk Hogan‘s courtroom cage match with Gawker being bankrolled