Menu
There are other candidates running for Mayor of St. Petersburg beside Deveron Gibbons and Scott Wagman. Unfotunately, their campaign budgets allow them to block out the light from other campaigns.

Take a look at this mailpiece from John Warren’s campaign. There is a lot to like here. I like one of the pictures. It’s not perfectly set-up, because there is more sky than there is John Warren, but it says to me, this man has a vision, yet knows how to work. I don’t like the picture of him in the sportcoat as that jacket is obviosuly dated. Without the jacket, Warren looks young and ready to fight. With the jacket, he looks old.

As for Warren’s message, it’s far from perfect, but there is an earnestness in words that some of the other candidates lack. Then again, some of his messaging is clumsy: “John Warren gets that we all need to get involved?” That’s the long way of saying “We are the change we’ve been waiting for.” 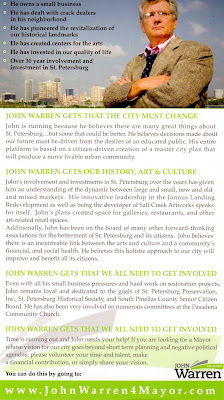 Warren’s logo is, believe it or not, the best of all the candidates running for Mayor. The colors are apolitical, yet still stand out because they are in line with the latest design trends that emphasize lightness. For example, you could see these colors as part of a major multi-national’s green effort campaign. 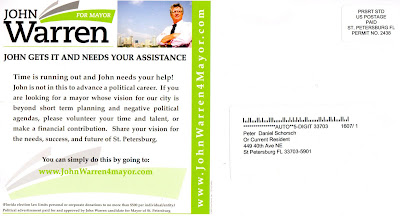 It would have been interesting if Warren had gotten into the race earlier and put some of his own money into his campaign. Instead, Warren got in at the last moment and then opted to file for a hardship waiver from the requisite fees. I don’t think his campaign is going anywhere, despite the effort he put into this mail-piece.