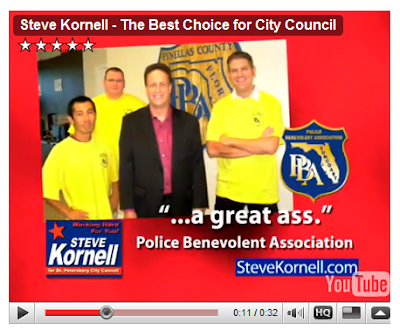 Not only does Kornell reference his endorsement from the St. Petersburg Times but Kornell was somehow able to convince the PBA to say that he has a “great ass.”Kornell’s ass could be the difference in a city-wide election. Up until this point, Kornell’s opponent, Angela Rouson, had all of the momentum going into the General Election — momentum she owed to the fact that she is just plain hot.

But now that Kornell has introduced the issue of how great his ass is, I can only imagine what Rouson will do to counter this charge, because she has a great ass as well. Voters just haven’t seen enough of it yet.

I was worried that this race was going to turn into a battle of stereotypes — the gay man versus the black woman, but Kornell’s bold message “I have a great ass!” changes everything.

The only drawback of paying so much attention to Kornell’s ass, is that it takes away from the rest of the commercial, especially the fact that Kornell won his district primary with “53% more of the vote.” With a city facing budget shortages, rising crime and a decision over what to do about the baseball stadium, nothing matters more than how much a candidate beat another in a district-wide primary.

I mean, UF beat Troy last night 56-6. That sure will help them in the national championship game, right?