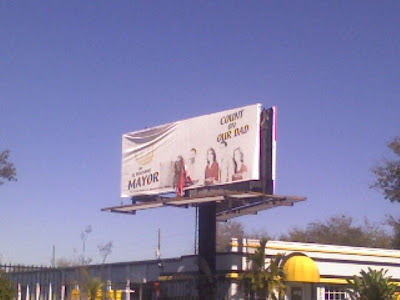 It’s been eight years since he was last seen in public, but Larry Williams looks like he is going forward on his threat to run for mayor of St. Petersburg. The City Clerk’s office reports Rip Van Williams woke up and picked up the official paperwork last week. Look for a Williams’ filing the first week of April right after a new fundraising quarter begins. And right after he files, look for my complaint against Williams’ campaign for not taking down that atrocious billboard EIGHT FUCKING YEARS AGO after he lost his last election. Up until now, no one could file a complaint with FEC about this billboard because outdoor signage is somehow exempt from having to be taken down, but the disclaimer on that billboard is not the right one and once Williams files, he’ll be back under the FEC’s jurisdiction. Hate to be a prick about this, Larry, but that stupid billboard should have been taken down a week after you lost. If you really cared about this city, you would have done something about it by now.
Tags: billboardcampaignCity Clerk's officeeight yearsFECLarry WilliamsmayorSt. Petersburg