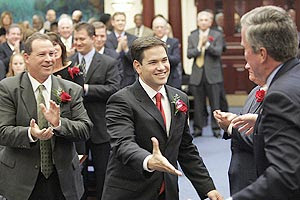 Hearing A LOT of chatter from the Pasco County GOP’s Teddy Roosevelt Dinner about the details of Jeb Bush’s imminent endorsement of Marco Rubio for the United States Senate. Reportedly, the Pasco GOP has locked in Bush to speak at their event in May honoring Ronald Reagan. At the event, Bush will introduce and endorse Rubio, who is also scheduled to speak.

Obviously, both Bush and Rubio will deny such preparations are being made, but this will be their first joint-appearance. Of course, they could schedule another joint appearance previous to the Pasco GOP event, but for looking for a date as to when Bush may endorse Rubio, this event could be the magical night.