Menu
Earlier this week, Democratic Rep. Kendrick Meek of Miami called on Congress to continue the ban on federal funding for abortions. That should sound good to Pro-Life organizations, right? Not so says that National Right to Life: 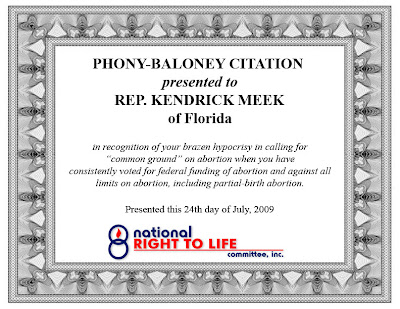 In a letter earlier this week to House Speaker Nancy Pelosi, which he co-signed, Meek claimed to seek “common ground” on abortion in the White House-backed healthcare “reform” proposals currently being considered. However, just last week, Meek voted in the House Ways and Means Committee against amendments to prevent the bill from mandating elective abortion coverage and to prevent federal subsidies for elective abortion.

Since coming to Congress in 2003, Meek has voted against the pro-life position on the floor of the House 30 times. He has never cast a pro-life vote in Congress on an abortion-related issue, not even partial-birth abortion, parental notification, or fetal homicide.