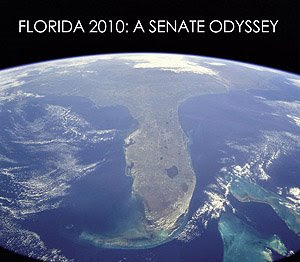 There is just so much being written about the 2010 Florida Senate race, I’m launching a three-times-a-week reader. Here is the first edition.

He’s a Democratic candidate often left in the shadows as pollsters and pundits examine what the upcoming Republican primary election between Charlie Crist and former state House Speaker Marco Rubio could mean for the future of Florida and the soul of the GOP. In a way, being out of the spotlight is an advantage for Meek, who said he’s building his campaign person by person, using every handshake as an opportunity.

The happy-go-lucky Senate candidacy of Charlie Crist has hit a speed bump, and it’s one of Charlie’s own making. For weeks, Florida Democrats have been goading Crist to tell us whether or not he would have voted to confirm Judge Sotomayor, who is headed to the Supreme Court (with or without his consent.) The wily, hard-to-peg, super-tan governor (who is one of the few Republicans widely considered a shoe-in candidate in 2010) refused to say. After all, Florida is heavy with Hispanic voters, and Crist was on a glide path to take a good chunk of their votes, along with those of Florida’s large, mainly moderate Independent block.

Various sources have put out lists of Senate seats most likely to change parties. While they don’t give the likelihood of any specific seat changing hands – for that you’ll need our DCW Senate Forecast, they are fun to argue about.