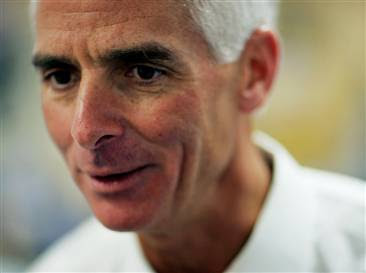 For Charlie Crist, it’s all crumbled apart so quickly.

In 2008, Florida’s governor was rumored to be a top contender to run with John McCain. A year ago, his poll numbers were in the stratosphere. And when he announced last May that he would give up the governor’s mansion after one term to run for the U.S. Senate, he held a 35-point advantage over his opponent for the Republican nomination, Marco Rubio.

That was then. Sometime over the winter, Rubio, a former state House speaker, drew even with Crist, and now he’s practically leaving him in the dust. The most recent poll has Crist lagging 18 points behind, with no apparent end in sight to the governor’s spiral.

Rumors abound in Florida political circles that Crist is having serious trouble raising money; one Republican operative describes a recent conversation with a Crist fundraiser in which the latter described her job as akin to pulling teeth. And there are even reports that Crist may give up on trying to win the GOP’s nod and run as an independent instead. Full story here.