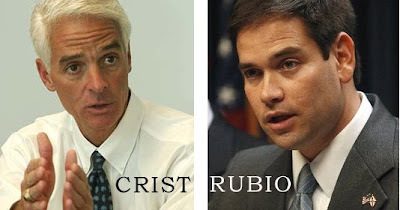 It is hardly the path to the top of the ticket many envisioned for Marco Rubio just a few years ago.

The West Miami lawyer, now 38, had a national profile even before he took the gavel as Florida House speaker in 2006. He held “100 Ideas” forums with the likes of the late Jack Kemp and Newt Gingrich. A Senate president predicted his charisma would ultimately lead him to the Governor’s Mansion and White House. Outgoing Gov. Jeb Bush even christened him his ideological heir by presenting him with a sword on the House floor.

But today, Rubio is running what amounts to a right-wing insurgent campaign for the U.S. Senate — shut out by the state and national GOP apparatus and snubbed by most of the party’s biggest givers. Read the rest of the story after the jump. His crime: challenging Gov. Charlie Crist, the anointed heir apparent to the seat being vacated by Mel Martinez, R-Fla.

So Rubio has taken his campaign underground.

Hoping to capitalize on a wave of anti-Washington animus over Crist’s support of Democratic President Barack Obama’s economic bailout and cap-and-trade proposals, Rubio has courted conservative bloggers and advocacy groups battling for the discombobulated core of the party.

“The scourge of national politics is people that will be, and say, and do anything to be elected. They will be for whatever the pollster says is popular at the moment,” says Rubio, who’ll bring his anti-tax, pro-growth message to a taxpayer “tea party” on the steps of Amway Arena at 11 a.m. today, and to a 2 p.m. rally at the Lake County Fairgrounds in Eustis.

Rubio’s candidacy has gotten the attention of national conservative groups such as the Club for Growth, which is contemplating buying ads against Crist.

And he has racked up high praise from some big-name conservatives — from Weekly Standard columnist Bill Kristol to former Arkansas Gov. Mike Huckabee — who are more concerned with reigniting the Barry Goldwater wing of the party than with more pragmatic goals such as denying Democrats a filibuster-proof 60-seat Senate majority.

“People are going to know Marco better and better,” U.S. Sen. Jim DeMint, R-S.C., said this week in a conference call. “I’m betting on Marco to win this whole thing and show the whole Republican Party that with candidates who really believe in something, we can take back the majority.”

But deep-pocketed campaign contributors also like a safe investment. And when Crist entered the U.S. Senate race in May, his status as perhaps the most popular governor in America drew instant endorsements from national GOP leaders — soon followed by efforts by top party fundraisers and even Florida GOP chief Jim Greer to install Crist as the de facto incumbent, despite grumbling by some rank-and-file conservatives.

“It is unusual to have someone running against a highly popular Republican governor. And at the end of the day, we’ll have to see what the results are,” Greer said. “I certainly see that the donor base is fully supportive of Charlie Crist here in Florida.”

Indeed, big-time fundraisers have lined up. Friday night, St. Petersburg physician and GOP financier A.K. Desai, who is Crist’s finance chairman, held a $2,400-per-person fundraiser for him at the Car Club in Orlando. Other prime donors, such as former Dolphins owner Wayne Huizenga, have done the same.

To combat that financial advantage, Rubio has relied heavily on social-media tools such as Twitter, Facebook, Web videos and an active e-campaign to stretch his dollars. He boasted this week that he was able to raise more than $125,000 online for the quarter that ended Wednesday.

But an anti-establishment appeal to tech-savvy GOP activists will go only so far in a mega-state such as Florida with 10 TV media markets. Later this month, Crist is expected to report he raised close to $3 million in just six weeks; Rubio likely will report less than one-third of that.

Still, he has managed to attract viral publicity, as he did two weeks ago when he wrote on Twitter that if Iranian protesters had Second Amendment rights, the protests would have gone differently.

“It is a wild-card strategy,” said Will McBride, the conservative Orlando trial lawyer considering a bid for attorney general. “It helps to get a viral-type message out, but there’s a threshold where you’ve got to get on television.”

It wasn’t supposed to be this way for Rubio. But after he was term-limited out of Tallahassee in 2008 — amid lackluster reviews of his speakership — he returned to Miami to practice law.

Friends urged him to run for a Cabinet post, such as attorney general, where he would be an instant favorite. Instead, he opted to take on Crist.

The behind-the-scenes urging to switch races has not relented, although Rubio says the die is cast.