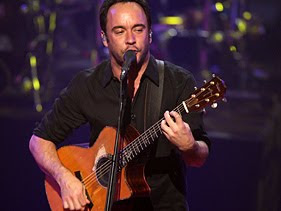 You may have heard about the hip new thing that the kids are trying out there, Hating on President Barack Obama because of his skin color. Well, you’re not fooling one David J. Matthews. In an interview with CNN, he’s aware of the ruse.

“I found there’s a fairly blatant racism in America that’s already there,” Matthews said in discussing the opposition to some of President Obama’s policies. “There’s a good population of people in this country that are terrified of the president only because he’s black, even if they don’t say it. And I think a lot of them, behind closed doors, do say it.” Full interview from CNN after the jump.Watching the Dave Matthews Band moments before they take the stage is like watching a football team bursting out of the locker room before a big game.

Dave Matthews says he bellieves strongly in the power of community.

They slap hands. Bump fists. Jump up and down, exclaiming “Feel the love, feel the love!” The energy in the air is electric.

And when they walk out on stage, the energy explodes into thousands of shining faces. People dance in the aisles. Others sing every word to every song. A few share funny cigarettes.

For more than three hours, the jubilant atmosphere creates a sense of community between an amphitheater filled with strangers and the ethnically diverse musicians leading the charge on stage.

But then DMB is all about community — creating its own and giving back. BAMA Works Fund — the group’s charitable foundation — has handed out $5 million in grants to worthy causes, including schools and victims of Hurricane Katrina. Watch Matthews sound off on the album — and racism »

And despite the unexpected passing of saxophonist LeRoi Moore due to complications from an ATV accident last summer, the band members seem to be recharged. In June, DMB notched its fifth consecutive No. 1 album on the Billboard chart with “Big Whiskey and the GrooGrux King.”

We caught up with Matthews just as news hit the Web that former President Jimmy Carter believed racism was the root of some of the negativity directed toward President Obama in recent weeks. The 42-year-old singer-songwriter offered a unique perspective, as a man who split his childhood between the United States and South Africa during apartheid. The following is an edited version of the interview.

CNN: President Carter said he thinks that a lot of the animosity directed toward President Obama is race related.

Dave Matthews: Of course it is! I found there’s a fairly blatant racism in America that’s already there, and I don’t think I noticed it when I lived here as a kid. But when I went back to South Africa, and then it’s sort of thrust in your face, and then came back here — I just see it everywhere. There’s a good population of people in this country that are terrified of the president only because he’s black, even if they don’t say it. And I think a lot of them, behind closed doors, do say it.

Maybe I’m paranoid about it, but I don’t think someone who disagreed as strongly as they do with Obama — if it was Clinton — would have stood up and screamed at him during his speech. (Shakes his head) I don’t think so.

CNN: Everything has gone to such a frenzied pitch.

Matthews: I think a lot of it has to be on the press. We give the podium to a lot of people who shouldn’t have the podium. The message that’s delivered the loudest and in the most entertaining way is the one that we’re going to put on because that’s what we want. We want ratings more than we want to deliver information. That’s just where the culture’s gotten.

There’s no way that Walter Cronkite, as a young journalist, no way Ed Murrow would be hired to do news today. Not a chance.

Matthews: Because they’re thoughtful, and they’re patient, and they’re tying to tell you a truly balanced story. They’re trying to impart information. I don’t think that’s the goal [now] because it’s not a good business plan. …

CNN: Before you went on stage at the Greek Theatre (in Los Angeles), we were talking to the crew — and they couldn’t wait to tell us how well they’re treated by the Dave Matthews organization. … It’s like your own minicommunity out there. You even print your own tickets, right?

Matthews: We have kept everything in-house. The core crew guys are the same guys we had when we were driving in a van, so they can always call “bull” on us if we start acting like prima donnas. It keeps a sense of community going when you travel a lot. There’s a good vibe. …

I have friends who are famous, and friends that are not famous — but there are those who stick out to me. Willie Nelson is one — a really genuine person — or Neil Young. Adam Sandler … people who really try and keep a sense of unity, and camaraderie and equality around them. That’s essential. That’s it for me. I don’t think socialism, and I don’t think warmness and respect are necessarily bad words.

CNN: Do you think you’re competitive? A perfectionist?

Matthews: I’m a very vicious critic of myself.

CNN: So what do you think of this record (“Big Whiskey and the GrooGrux King”)?

CNN: Before this album, weren’t you burned out a little bit?

CNN: What other tricks do you have up your sleeve?

Matthews: I want to figure out a way to not be stupid with money, then make a whole bunch of it, then I want to move to Outer Mongolia. I want to milk a yak. Maybe I’ll just settle for a cow. Can you milk a bison? I have fantasies about being a farmer. I always wanted to be a fireman, but who didn’t want to be a fireman? I just wouldn’t tell anyone. I’d just go “poof!” Sometimes I like that idea.

CNN: You don’t tell people about a lot of things you do. There’s no press release that goes out saying, “Dave Matthews Band just donated $5 million to this cause or that cause.”

Matthews: We definitely use our fame and our celebrity to raise money for things we care about. … What a luxury to be able to just do a show, and then look — pow! …