Menu
First of all, I want everyone to know at the onset that I had nothing to do with the design of this mail-piece. There is a rumor floating around that I designed this seemingly positive mailpiece for Steve Kornell as a convoluted attempt to reinforce some sort of message to conservatives that Kornell is gay. 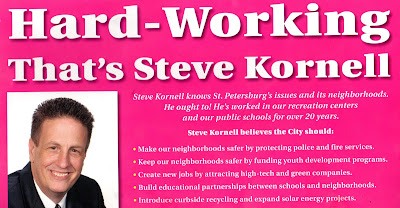 Well, I am just not that clever. I haven’t said one damn thing negative about Steve being gay. In fact, as we head into the final weekend of this election, I think some of my critics out there owe me an apology because there was a lot of talk at the beginning of this race that I was going to run some sort of negative campaign against Steve because he is gay. But the opposite has proven true.

That said, what were Steve’s supporters thinking when they sent out a PINK mailpiece. I know it’s Breast Cancer Awareness Month, but I don’t think that was the reason why whoever sent this mailpiece used PINK. Never, in any campaign, have I seen a PINK mail-piece from a candidate. The only time I remember the color PINK was discussed in a political campaign was when Dick Nixon accused Helen Gahagan Douglas of being “PINK” right down to her underwear. 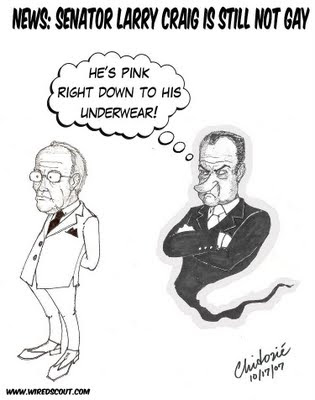 PINK? Really? It doesn’t matter if Kornell is gay or straight, PINK is not the color most associated with strong leadership. PINK is associated with lemonade, leotards and panthers, not City Council candidates.