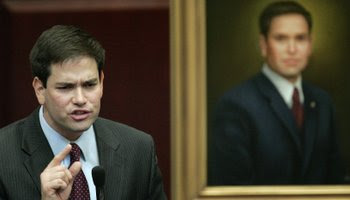 The fundraiser set to be hosted Wednesday by elected officials and business leaders at the posh Biltmore Hotel in Coral Gables sounds like countless other receptions benefiting Florida’s political establishment.

But the invitation topped with bold-faced names is for Marco Rubio, the upstart candidate for the U.S. Senate daring to challenge the popular Gov. Charlie Crist for the GOP nomination.

Rubio has been mostly raising money over the Internet. Crist has been attending swanky events almost nightly this month.

Their lopsided fundraising battle and poll ratings suggest Rubio’s campaign will not end well, but the former Miami lawmaker posted a good week on the campaign trail.

He burnished his credentials as a fiscal hawk with an endorsement from U.S. Sen. James DeMint of South Carolina, one of the most conservative members of Congress. He won a straw poll, 73-9, at a meeting of the Pasco County Republican Party, which backed Crist in a rare primary endorsement in 2006. And an MSNBC interviewer introduced him on television Friday as ”GOP’s Barack Obama” and “the man who might be the answer to the GOP’s problems.”

While none of these developments come close to signaling a real threat to Crist, they suggest Rubio’s campaign is not a lost cause.

”I think that the debate is healthy, and nobody in this country, the last time I checked, is entitled to anything,” said state Rep. Steve Bovo of Hialeah, a host of Rubio’s upcoming fundraiser. His wife also did consulting work with Rubio after the former House speaker left office last year.