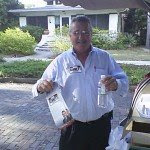 At the heart of Jamie Bennett’s defense in Ticketgate is there was no political strategy behind the distribution of his tickets to the city’s suite at Tropicana Field:

“Schorsch, in turn, claimed the tickets were part of a campaign strategy. The plan was to use the tickets to curry favor with neighborhood leaders and canvass their neighborhoods just before the association’s monthly meeting in hopes of generating a positive buzz, Schorsch said.

Bennett said there was no such “ticket strategy.”

Assume for a moment you take Jamie’s word for all of this. That my delivering the tickets to Darren Bishop in a campaign folder was unsanctioned. That Jamie’s giving of tickets to Mike Finnerty, Bob Devin Jones, etc., is not a case of post hoc ergo propter hoc.

But what about my contention that the distribution of the tickets was part of some (not so original) grand political strategy described above.

Remember, Bennett said there was no such “ticket strategy.”

But look at this picture I found on Jamie’s blog. It is of him “walking in Euclid-St. Paul’s”, it is posted on April 30, the same day the first article ran criticizing Jamie Bennett for distributing tickets via me.

At first the picture doesn’t prove much. It’s just for a blog post bragging about walking in the Euclid-St. Paul neighborhood around April 30.

Except the house in the background of this picture is owned by Raoul Simon, the president of the Euclid-St. Paul neighborhood association.

What this picture shows is Jamie Bennett, five minutes after he delivered baseball tickets to the president of a neighborhood association (outside of his district) with walking materials and bottled water in hand, indicative of what he was doing, which is canvassing around Mr. Simon’s home at 925 15th Avenue North. You can even see the brick streets found in that neighborhood.

Look at the smile on Bennett’s face. Is that the face of someone who had ever admonished his campaign manager for making political hay out of a stack of tickets? No, that is a candidate who just made contact with a neighborhood leader, having a picture taken for his blog.

It’s time for the bullshit to end. Jamie Bennett knew about the political strategy behind the distribution of his tickets to the city’s suite. Every thing up until this point has just been my word against his. Or just coincidence. Or just him being in the car.

Take a look at that picture and you will see that the truth is altogether different.

The price of watching sports in Tampa Bay area is going up. The Tampa Bay Lightning