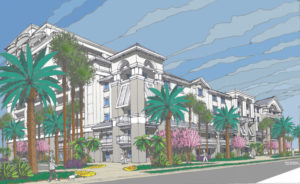 The TradeWinds Resort may have hit another snag in its proposed 116-foot tall, 12-story complex on the former Coral Reef Hotel site in St. Pete Beach.

A former candidate for the St. Pete Beach City Commissioner is suing the city to block the development, claiming the building is too tall for the neighborhood, and the OK violates an earlier agreement that limits the height of any new construction.

A Tampa Bay Times article in September 2016 said that Sugar Sands would be the city’s first major redevelopment project since 1999.

James Douglas “Jim” Anderson, a 53-year-old St. Pete Beach resident, filed suit against the city too, according to the Times, “block development he claimed would be beyond the capabilities of the city’s sewer system and other infrastructure.” Jim and Brooke Anderson reside in a 1,300-square-foot home in the Belle Vista neighborhood, located about 1.4 miles from the proposed Sugar Sands hotel.

In a settlement with the city in 2015, officials ordered an 80-foot cap on development projects until a series of required infrastructure studies have been completed.

A retired firefighter, Anderson had run several times for the St. Pete Beach Commission, running in 2008 on a platform that included a “No Tall Buildings” pledge.

As his campaign website states, Anderson “spent the past two years working to assure the right of the people of St. Pete Beach to vote on building height and our comprehensive plan. He has helped stop overdevelopment and concrete canyons.”

In April 2017, the St. Pete Beach Board of Commissioners approved TradeWinds’ application to build the Sugar Sands. But Jim Anderson, a longtime opponent of tall buildings in the city, says the city’s approval violated the 2015 agreement.

A suit filed in Pinellas County Circuit Court May 25 seeks the board approval reversed.

State Sen. Jeff Brandes is going mobile. The St. Petersburg Republican announced Friday he will be

While good fences may make good neighbors, a proposed dock in the
A St. Petersburg attorney is filing a first-of-its-kind suit against credit-ratings agency
One of the Tampa-area projects devastated by the 2008 real estate crash
A local human resources firm is suing the estate of its former
A couple looking to build an $800,000 waterfront Gulfport home had their
Go to Top

Seven of the top 10 beaches ranked as the best