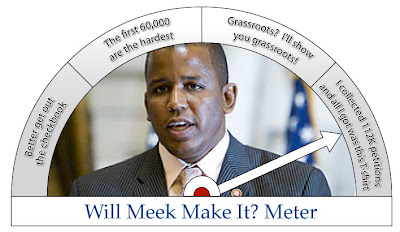 Just got off of a phone call with Kendrick Meek’s campaign manager Abe Dyk and he says that the campaign has collected 112,000 signatures to date and will collect 130,000 by the deadline of March 29 – enough to make Meek the first candidate in Florida to qualify for the ballot by petition. So, of course, I am going to upgrade the Will Meek Make It Meter? to its highest level: “I’ve collected 112,000 signatures and all I got was this T-shirt” which I believe represents the sentiment surrounding Meek’s effort.

It took a year to accomplish this goal, there was and will be little publicity surrounding the effort because voters don’t care how a candidate qualifies for the ballot. Only the bloggiest of blogs, like this one, care.

And the campaign may still pay the qualifying fee just in case it gets “dragged into” a legal dispute over the validity of the signatures, Dyk acknowledged.

“We expect that we are going to make the ballot and make it with enough that we won’t be paying that fee,” Dyk said. He said if the campaign paid the fee it would be “doing it only to make sure.”

The real story here is that the pace of Meek’s campaign allowed all of the oxygen in this race to be absorbed by the Rubio vs. Crist intrigue. Of course, there is more than enough time for Meek to rebound from the polling deficits showing Meek trailing both Crist and Rubio.

But the most interesting takeaway from the conference call with Dyk: Only three reporters bothered to ask him a question. If Crist or Rubio had been on the line, I imagine the number of questions would be ten times what Dyk was asked.

The Tampa Bay Times settled a libel suit filed against