Menu
After his appearance on Bay News 9’s political connections this past Sunday, Adam Smith, the political editor of the St. Petersburg Times, was startled to receive an irate phone call from Fox News’ Tucker Carlson who had a very straightforward request of Smith. 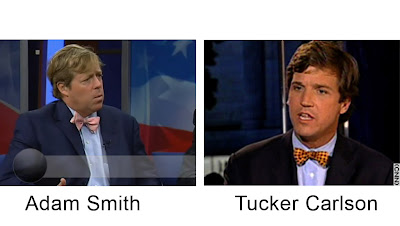 “Give me back my ‘look,'” an obviously distraught Carlson pleaded with Smith after the latter “borrowed” one of Carlson’s blue blazer and bow tie get-ups, a wardrobe referred to in the fashion world as prep-school geek chic.

Evidently, Smith would have none of it, standing his ground against the better known, but despised Carlson, whose mercurial rise and fall in the political commentary landscape is well documented. Smith insisted that, since no one ever took Carlson seriously to begin with, that there is still room on the Sunday morning talk show circuit for a bow-tied blowhard. “I plan on riding this bow-tie to a spot on Meet the Press,” said Smith. “It’s bye bye Al Reuchel, hello David Gregory.”