Menu
Of the 22 individuals crazy enough to run for elected office in St. Petersburg, the two with perhaps the best websites are candidates for City Council, rather than the better-funded candidates for Mayor.

Well, mayoral candidate Scott Wagman has the best website, with plenty of YouTube videos. But at an expense of $20K, the cost of Wagman’s website far exceeds its value. Jamie Bennett had a good-looking, workhorse of a website, loaded with several active blogs. But since I left his campaign, he has failed to update most of his site, including his Twitter account in more than 50 days.

So, almost by default, the two best candidate websites, at least in terms of bang for the buck, are Karl Nurse’s and Angela Rouson’s.

Karl Nurse’s site, designed by Mo Eppley and her team at MityMo, has all of the requisite bells and whistles required for a solid political website. There is a video introduction, a sharp navigation system and lots of background on Karl’s efforts on City Council. 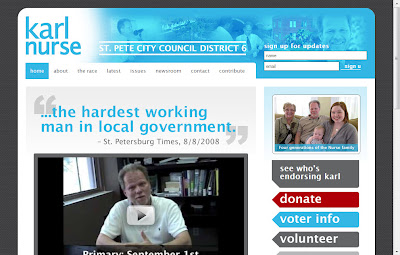 I’m still undecided whether I like the quote Nurse’s campaign relies on, that he’s the “hardest working man in government.” I understand dealing with Leslie Curran can be a real pain in the ass, but sitting on the City Council is not as hard as, say, being a police officer or firefighter or sanitation worker.

The other site I like is the one designed for Angela Rouson’s campaign. It’s apolitical design and abundance of information designed to assist voters in registering to vote and voting by mail makes this site very user friendly. There isn’t as much information about Angela’s stance on the issues as there is on Karl’s, but there is something friendlier about her site (disclosure: I originally designed her campaign logo), especially in the icon-based navigation system, as opposed to Nurse’s text based. The “slider” picture display is as cool a feature as you will find on a website, political or commercial. 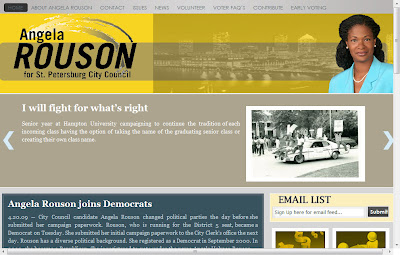 As I wrote before, the two websites that are just cringe-worthy are Joe Smith’s and Richard Eldridge. Smith’s looks like it was designed in the early part of this decade, while someone needs to tell Eldridge that you don’t put up that big a picture of yourself. Ever. 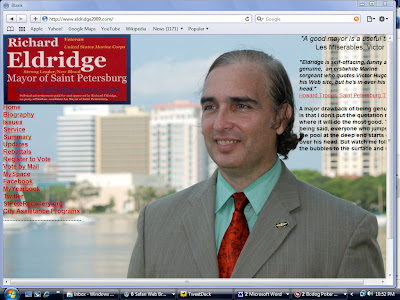