The editorial page of the Wall Street Journal tagged Charlie Crist as the Republican Barney Frank, but not for the reasons you may assume. 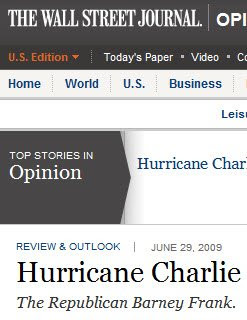 “Florida Governor Charlie Crist is running for the U.S. Senate next year, and we wonder if one reason is that he doesn’t want to be in Tallahassee when the next hurricane hits his state. His veto of a hurricane insurance reform bill last week all but guarantees a state disaster on top of any wrought by Mother Nature.

The bill would have trimmed the cost of a state-run enterprise that insures homeowners against storm damage. The program has an $18 billion unfunded liability and has taxpayers on the line for tens of billions in property losses from the next major hurricane. The Republican legislature tried to reduce those future losses, but Mr. Crist sounded like Barney Frank rolling the dice on Fannie Mae in declaring there’s nothing to worry about.”

I can’t imagine another person Charlie Crist does not want to be compared to more than Barney Frank.