Menu
Scott Wagman added another name to his collection of endorsements from black leaders whose sole purpose is to supply quotes to the St. Petersburg Times, with St. Petersburg City Councilman Wengay Newton endorsing Mr. Houghton-Wagman’s campaign for Mayor.

Newton’s main criteria for who would make the best Mayor? According to Newton, often the lone voice of dissent on the City Council, that the candidate be like him and not be like everyone else. “He is just like me,” Newton said. “He is not one of them.” 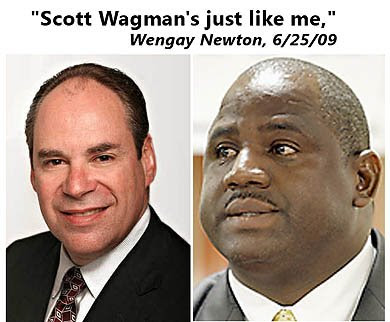 I only hope Wengay doesn’t drag his closest political ally Bill Dudley into Wagman’s camp. Unfortunately, I have heard Coach say some good things about Mr. Houghton-Wagman, respecting him for his business acumen. Please keep in mind that helping people redecorate does not make someone ready to lead a city.

As for the Interior Dictator, I’m sure he has been led to believe that Newton’s endorsement matters; the YouTube video within days.

Actually this whole situation makes me wonder: what exactly transacted between the City Council’s most, um, transactional member and the mayoral candidate with nothing but cash to burn.

When polls close at 7 p.m. in St. Petersburg’s mayoral primary, the question is not who received

St. Petersburg entrepreneur Bill Edwards, in association with the St.