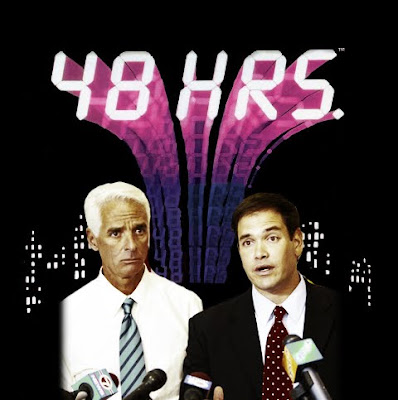 After a week in which he was labeled by the St. Petersburg Times’ as the “Loser of the Year” in Florida politics, it’s hard to imagine that things can get any worse for Charlie Crist.

Unfortunately, he hasn’t seen anything yet.

From the time the Quarterly Meeting of the Republican Party of Florida begins on Saturday to when the last vote is counted from the Pinellas County Republican Executive Committee’s straw ballot, Charlie Crist’s campaign for the U.S. Senate could be in a free fall.

In other words, next weekend will be the toughest 48 hours of Charlie Crist’s political career.

On Saturday, there will be some sort of motion to begin the process to remove Jim Greer as Chairman. This is when the RPOF arrives at the Boris Yeltsin on-top-of-the-tanks moment.

Someone will get ruled out of order, some motion will not be recognized and that’s when hotel security gets called. Do the soldiers shoot or do they allow the counter-revolution to continue?

There won’t be any shooting in Orlando, but, at some point, when the argument over whether Greer can be removed or nor, or whether it’s even possible to remove Greer or not, RPOF Executive Director Delmar Johnson will have to belly up to the Jacobian wing of the Republican Party. Will a fight break out? Does hotel security clear the room? What will happen?

But after its all over, Charlie Crist will either be left with his hand-picked, handicapped ally as party chair or a newly installed interim chair not as inclined as Greer to back Crist in the primary.

And by this point, the weekend will only be half-over for Crist.

Charlie Crist should never have allowed next Monday’s straw ballot to occur. But Marco Rubio’s operatives in Pinellas, such as the gregarious Tony DiMatteo, have lured Crist into an obvious trap by scheduling the straw ballot. Crist’s young staff, no longer managed by George LeMieux, is convinced that Crist can win the Pinellas straw ballot.

But what happens when Crist loses?

Pinellas ia Crist’s firewall and not in the Hillary Clinton sense of the word. The Pinellas straw ballot has to go for Crist or his campaign goes into free fall with a disastrous legislative session looming for Crist. If Crist gets bogged down in Tallahassee, the race could be over by May.

The national conservative media will turn a Crist loss into a clarion call that David can, in fact, beat Goliath. Remember it was the PCREC’s endorsement that was the lynchpin of Crist’s victory in 2006 over Tom Gallagher. It was DiMatteo, then chair of the PCREC, who engineered the county’s support for Crist (along with a contribution for $50,000) and walled-off Tampa Bay from Gallagher’s campaign.

So the question remains, can Crist win Pinellas?

Since Crist was elected, he has alienated DiMatteo and many other local Republicans irked by Crist’s questionable appointments, such as the time when Crist selected Democrat Jack Hellinger over loyal Republican and straight-shooter Tommy Minkoff. Crist’s receent appoint of Minkoff to an open judicial seat was suppose to soothesome of the bad feelings felt among local activists, but these activist smell blood and the . Crist did do right by JJ Beyrouti, appointing him to the Pinellas County Housing Authority, but that was only a start.

Recently, Gary Fineout’s wrote an excellent piece about titled “So where did it start to go wrong for Charlie Crist?” in which he makes the argument that

if you look closely (Crist’s) press coverage began to change during the summer of 2008. This is when Crist went on a trade mission to Europe and Russia where he did things like discuss climate change with the Prince of Wales. At a time when the state’s economy was already souring, this was the first time that it was suggested that Crist’s political radar had malfunctioned.

I have to disagree with Gary, who is taking a Florida-centric view of Crist’s career. The wheels started coming off for Charlie when he snubbed DiMatteo and the rest of his GOP allies in Pinellas. After he was elected, it was as if Charlie had grown up in Fort Lauderdale, rather than St. Pete. (And I have a theory about that too. About why Charlie seems not to care for many of his ol’ friends from the ‘burg. It’s because Charlie knows WE KNOW the truth about Charlie. To many of those in Tampa Bay, they view Charlie as the good-time guy who trolled at The Big Catch. If you knew Charlie then, it’s hard to envision him now as Governor. He’s the guy who failed the Bar, who worked as a lawyer for minor league baseball, who Martin Dyckman made fun of on the op-ed pages of the Times) and who lost his first campaign to Senator Jeanne Malchon. It’s for reasons like those that Crist did not win a majority of his hometown’s voters.

But if St. Pete wasn’t with Charlie, the Pinellas GOP always was with him. That’s why I can’t tell you how much it hurt Charlie when he turned his back on his local allies. But Charlie will find out next weekend during the most difficult 48 Hours of his political career.