Menu
Earlier this week, the Los Angeles Times pubbed a major piece by Peter Wallsten on the subject of Obama’s growing “problem” with white voters. The article cites a series of developments since the president’s 100-day mark in office–from the Van Jones episode to some comments by Congressman Charlie Rangel to a Ramadan dinner at the White House–as possible contributors to declining white support for the president and his agenda. Nate blogged about this article recently here. 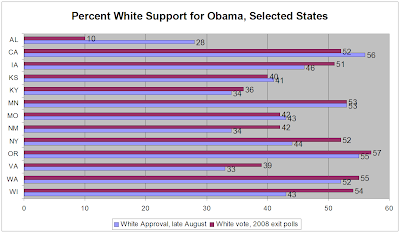 New surveys show steep declines in Obama’s approval ratings among whites — including Democrats and independents — who were crucial elements of the diverse coalition that helped elect the country’s first black president.

Among white Democrats, Obama’s job approval rating has dropped 11 points since his 100-days mark in April, according to surveys by the Pew Research Center for the People and the Press. It has dropped by 9 points among white independents and whites over 50, and by 12 points among white women — all groups that will be targeted by both parties in next year’s midterm elections.

There are (at least) two things to keep in mind when considering the potential political and (in 2010, 2012) electoral impact of Obama’s white support. Read the rest of this piece from 538.com after the jump.First, remember that Obama only received 43 percent of the white vote last November, according to exit polls.

Second, there is of course quite a bit of state variation in Obama’s white support. The figure above reports white support from 13 statewide polls taken in the last week of August, as compiled by SurveyUSA. Though not a perfectly representative sample, the 13 happen to include states large and small; from the North and South; whose populations are largely white or mixed-race; featuring high median incomes and low; and that were swing states as well as blowouts in the 2008 presidential. For these 13, I then provided Obama’s share of the statewide white vote last November. (CNN’s link here for Alabama; you can use the menu bar at the top of the page to select any of the other 12 or all 49 other states.)

And guess what? The president’s late-August approval numbers among whites aren’t much different from his share of the white vote on Election Day. Approval rating is not a pure proxy for voting behavior; people who “approve” of Obama may not have, and may not again in 2012, vote for him, and vice-versa.

But the point I’m making is that Obama’s white voter “problem” is a bit overstated. Yes, he seems to have dropped a bit in Virginia and Wisconsin, two states he won by a somewhat slim and very comfortable margin, respectively. And maybe he had better pay attention to New Mexico. But his numbers are actually up in some states, and overall they track pretty closely in all 13 states except Alabama–where his approval far exceeds his white vote share 10 months ago.

California Gov. Jerry Brown believes the deciding factor for Democratic candidates should be intelligence, suggesting that as

It was a far cry from “The buck stops here.” President Donald Trump, dealt a stinging

It was a far cry from “The buck stops here.”