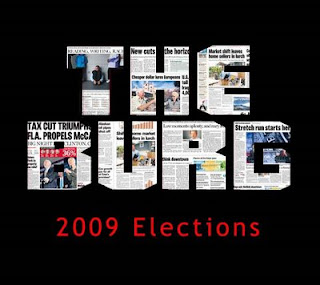 1. The St. Petersburg Times should be embarrassed by the turnout at last night’s forum. There wasn’t more than 150 people in the audience, none of whom haven’t already made up their mind. The entire balcony was empty! That’s how bad the Times’ “picayune” coverage has been…that no one, and I mean no one, cares enough to show up for the only televised debate of the campaign.

Where was the Police Chief or members of his command? Where were the Masters of the Universe that make this city run, the Ed Ameens, Charlie Harris and Dan Harveys? Where were the Rays officials, who want the city to pony up $500 mill for a new stadium? Where were the neighborhood presidents? Or the city workers? Where was everybody?

2. What Kathleen Ford is doing now is called running out the clock. She knows that she is in first place and there is really no way she can fall all the way to third and out of the general election. It’s the 4th quarter, she has the lead and it’s time to run out the clock on the primary election. She’s not going to say anything close to controversial, she may even dial back her criticism of Rick Baker. She’s not going to spend another penny, not that she was spending much before the latest polls confirmed her frontrunner status. Last night, she talked about “salty breezes” and walking along the waterfront. In football parlance, that’s called Fullback Dive.

2b. Deveron Gibbons and Scott Wagman, mired in 3rd and 4th place respectively, needed to air it out last night. But what I saw were two candidates who will combined spend about $700,000 and will not be able to beat a woman considered the most divisive force in city politics.

3. Deveron is not Barack Obama. He’s not Harold Ford. He’s not JC Watts. He’s not even Ken Welch or Darryl Rouson. Last night, he was barely able to finish a complete thought, mostly restating the question while giving no answer. He has run a cynical campaign, hiding from the media, slurping from out-of-town developers and political interests. Adam Smith’s best line of campaign was something about Gibbons being a young glad-hander in an ill-fitting suit spewing vague answers. Gibbons’ performance last night reinforced that image to anyone watching. Shit, his campaign manager, Nick Hansen, and campaign consultant, Adam Goodman, didn’t even bother to show up.

4. I know I am not the most photogenic guy in the world, so I don’t like to make fun of how other people look but Scott Wagman did not look good on television last night. Forget about everything he said — an easy task I’m sure — and just think of the visuals. The man looked downright Nixonian. Squinty-eyed. Sweaty forehead, jowly, angry.

5. Not that any of the candidates looked good on television. Not one of them was smart enough or ADVISED WELL ENOUGH to speak into the camera rather than to the moderators off to the right. This left viewers with screens filled with awkward faces and bad profiles.

6. I made sure to sit in the front row just to make sure every one of those son of a bitches saw me. I sat next to Dave Zachem and Barry Edwards. As David said, the “three biggest (fill in the blank) in Tampa Bay.”

7. I wanted to pass out fliers before the debate urging people to vote None of the Above and now I regret not doing so. There were no leaders on the stage last night. There were some City Council members, some who think they know better, some who never knew better. There were at least four people that had no business being on the stage because of their low standing in every poll and whose presence took away from hearing from the candidates who have an actual chance of winning. Last night, scanning from left to right, I did not see a collection of city leaders, but rather the political equivalent of the Bar Scene from Star Wars. 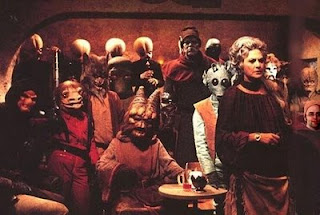 8. Rick Baker, wherever he is, should be concerned. About his legacy. About his most hated political opponent succeeding him. At the Bay News 9 insta-poll showing more people believing the city is worse off now than it was eight years ago. It’s no secret he hates Kathleen Ford, but he also despises Scott Wagman, calling him “an idiot” with an “idea a day” in private quarters. Unfortunately for Baker, Ford is all but certain to make the general election and Wagman could catapult into the general with a strong finish. It’s time for Rick Baker to mobilize what’s left of his forces for Bill Foster. Now, Rick, now.

9. As for the actual “Conversation with the Candidates” Ed Helm probably did the best. He was just tickled with the idea of seeing himself on TV. Larry Williams had the best moment, speaking from the heart about his daughter being accosted by a panhandler.

The aftermath of the debate saw me being ignored by Cristina Silva, talking with Bill Foster and Karl Nurse on the steps of the Palladium, sharing a drink with Dave Zachem at Bella Brava, saying hello to Kathleen and Harvey Ford at the Yacht Club, eating dinner with Elise and Tommy Minkoff, and finally considering smashing a beer mug over Lance Eppley’s head, only to share a few beers with him and realize he’s one of the good guys.