One month after helping to run controversial doctor David McKalip out of town after he emailed a racist photo of President Barack Obama, the St. Petersburg Times published an op-ed from McKalip in which the neurosurgeon continued his efforts to block Obama’s health care plan. You can listen to McKalip’s speech here). 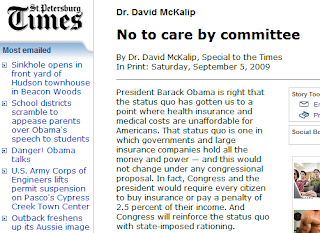 After his public shaming, MacKalip did not go quietly into the night. He broke off from a family vacation in Yellowstone to attend a TEA Party in Montana where he blasted Obama’s health care plan. Then he showed up at a Floridians Unite rally in Orlando, where he delivered this speech:

After sending out that racist email, for which he demonstrated little remorse, should Dr. McKalip’s poison pen have found a home on the Times‘ op-ed page?