During last year’s St. Petersburg Mayoral Campaign, when I published blog post after blog post about that election, I took note of a subtle trend in how visitors were arriving on my site. As much as I would have liked otherwise, many of my readers were not coming directly to Saint Petersblog, rather they were coming to the site after searching for a particular term in Google, Yahoo, etc. Yes, there was a base of regular readers who arrived on the site directly, but thousands of visitors were coming to the site after Googling terms associated with the St. Petersburg Mayoral Campaign: Bill Foster, Scott Wagman, Kathleen Ford, Deveron Gibbons, Rick Baker, etc.

Fast-forward to the 2010 Elections: Charlie Crist vs. Marco Rubio vs. Kendrick Meek, all statewide offices up for grabs, competitive congressional and legislative races. Voters are hungry for information about all of this. Of course, they can turn to the mainstream media, but, as any blogger will tell you, the traditional media is no longer the end-all, be-all of political news coverage. The blogosphere and social networks are where the action is in 2010.

But how do readers get to the blogs, to Facebook pages of people they’ve never met, to Twitter messages from writers they don’t follow? The average voter, hungry for more information than what the St. Petersburg Times or Miami Herald offer, especially in this era of less coverage and more staff cuts, don’t know about Saint Petersblog or Sayfie Review or Sticks of Fire.

Voters are hungry for more information! That’s why, to satiate the hunger in Tampa Bay for more, if not better coverage of local and state politics, I am launching a series of new blogs, Facebook pages, Twitter accounts and websites.

The first of these projects is Battleground Tampa Bay, a blog combining first-rate original content with news and information aggregated from many of Florida’s media outlets and social networks — all of it search engine optimized. 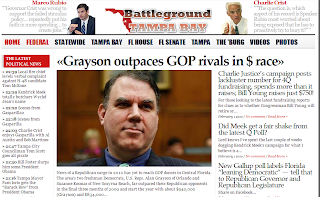 The mission of Battleground Tampa Bay (BTB) is to provide the kind of in-depth analysis and on-the-ground coverage of the region’s congressional, legislative and local races which was once the hallmark of the so-called traditional media.

BTB is still a work in progress. Quite honestly, the technology which is enabling the site — a comprehensive, customized WordPress template — is still in the beta testing phase. So I am still learning about all of the site’s capabilities. But, I’ll tell you this, the content management system I am using is as good as any newspaper’s. In fact, when I showed former Tampa Tribune executive editor Janet Coats a prototype of this site, she wondered aloud why she shouldn’t move her newspaper’s entire online effort into this type of system.

Battleground Tampa Bay’s design is optimized for advertising and I trust political campaigns — and those who want to influence them — will look to BTB as a cost-effective way to reach their targeted audience.

Oh, and what about my first blog Saint Petersblog? I believe this is a case of addition by subtraction because, without having to cram everything onto Saint Petersblog, the site can become more focused. It’s my intention to continue to position Saint Petersblog as the leading blog in St. Petersburg and Tampa Bay.

This is just the beginning of many online projects I will launch this year. I am already working on a comprehensive news site dedicated to North Pinellas, a barrage of Twitter accounts and several other projects. In the meantime, please put Battleground Tampa Bay in your favorites column, your Google reader, etc. And please know, your feedback is very much welcomed.