Who remembers the short-lived site, Friendster?

Six years ago I was asked to sit on a panel at a conference to give “expert advice” on social media use at work.

I wish someone had shot some video footage; in the lifetime of social media, six years is an eternity.

Just think … in 2008, Myspace peaked. Myspace was the most visited social networking site in the world, attracting during that time 75.9 million unique visitors a month.

Now, in 2016, we have a slew of options for social media; none of them are Myspace.

At work, we have an Instagram account, Twitter feed, and Facebook account. Our Facebook page consists (mainly) of 600 friends in the community; Tallahassee being a small market, our personal and professional lives overlap quite a bit. Social media should be part of your daily routine, no matter what line of work you are in.

If you aren’t out there, you can bet a gallon of peach schnapps your competition is.

Granted, you don’t have to be garrulous and post every five minutes about what you had for lunch, what you are reading, what you think of the service at the car palace. Keep your messaging and content fresh and make sure you pay attention carefully to the difference between personal and professional posts.

It’s a gray area, but an important one.

Ryan went on to say this about the general state of social media: “The cardinal sin of social media: Businesses that wait too long to respond to a crisis. When businesses stay silent, they turn over control to consumers. In only a few hours, you’ve got thousands of people spreading misinformation because the market didn’t value them enough to share the truth.” ‘

Do you remember SeaWorld and the documentary “Blackfish,” about whales in captivity? It cast the amusement park in a negative light. So to try and refresh the brand.

They launched the #AskSeaWorld hashtag campaign.

Guess how that went over? Like a non-alcoholic beer at Madis Gras.

People flocked to it, calling them an “abusement park” and other clever names.

Perhaps the best advice would be to take Ryan’s advice — respond quickly but don’t open it up to Q&A for the world. That is, unless you are ready for the backlash. 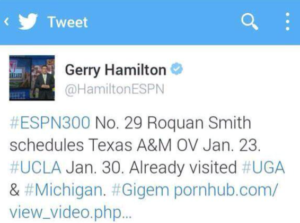 We all multitask these days, having several windows open at once. College football analyst Gerry Hamilton was tweeting about our nations’ top football recruits, and he accidentally included a link to an adult site.

Unlike most fails, Gerry pulled a new one and never even acknowledged it — no apology to ESPN and fans of college football. I would not recommend that approach, but the heat went away pretty fast for Gerry. However his name is forever damaged, the internet never forgets as screenshots were taken before he could take it down. Like this one.

Even the government is not immune to mistakes; when you give someone control of a social media account, you are literally putting your reputation in their hands.

I personally manage our social media presence to try and balance the content with humor and information, and, most importantly, getting the Aegis name out there.

A U.S. Justice Department employee tweeted this year — “CNN is the biggest troll of them all.”

Whoops; that was an error. They meant to send that to their personal account. Silly humans!

Social media is a tremendous responsibility to manage. When used correctly, it can bring excellent brand recognition. There are experts on social media like Ryan, so reach out to them if you need to find your way.

Also, make sure not to assign social media responsibilities to the youngest person on the team. Sure, they might understand the tech the best, but they might not have the experience to manage your image.

Along those lines, Cohn also added the following: “Social media is like an iceberg: Most conversation takes place below the surface, private and outside the view of businesses. The conversations that change minds and purchasing behavior most often occur between friends — recommendations are used as social currency. Identify and empower your leading advocates — especially employees and clients — to talk about your company and share useful information. You may not always be able to see their conversations, but you’ll see the impact at your cash register.”

I would like to thank Ryan for contributing to this piece, and I look forward to seeing everyone out there in the social media universe.

Blake Dowling is CEO of Aegis Business Technologies. His columns are publishing by several organizations. You can reach him at [email protected].

The infotainment technology that automakers are cramming into the dashboard