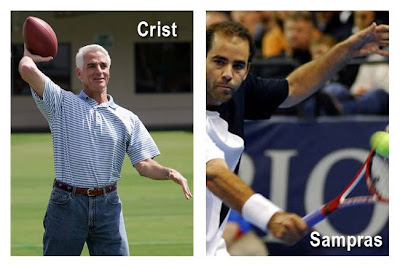 Here’s something fun to do when not stuffing the turkey this week…take a look at this article written about tennis legend Pete Sampras. I took out every mention to Sampras and tennis and substituted them with an applicable reference to Charlie Crist and politics and I came to a startling conclusion: Charlie Crist is the Pete Sampras of politics, a former champ in a slump ever since he got married:

Charlie Crist is on an uncompromising mission to revive his campaign for the U.S. Senate and to cement his place in Florida’s political history. The once-expected easy path to Washington is now obstructed with challenges.

As the 53-year-old pushes for a special legislative session to address high-speed rail, he refuses to let others write the conclusion to his meteoric. He does not want sympathy, pity or best wishes — just a little respect.

But after a disappointing start to his campaign, Crist realizes he will have to earn that respect — again.

“I made it look so easy all those years,” said Crist, who has seen his approval ratings as Governor drop below 50% for the first time since he took office.

For the majority of his three decades in public life, most has gone Crist’s way. Blessed with extraordinary talent, he leapfrogged from one political office to the next, first the state Senate, then to the Cabinet and then, in 2006, the Governor’s office. Even with his current political problems, he remains the state’s leader in fundraising.

Despite this distinguished record, Crist says he is not ready to turn over the reins to the Alex Sinks of the game, despite being the first Governor in modern history not to seek a second term.

“Charlie can unequivocally get back up there and win next November,” says a close aide. “He is such a gifted politician. He could rely on his talent early on and coast a bit. But at this point he has to work harder.”

Still, after a recent poll showed Marco Rubio within ten points of Crist, many wondered if Sampras had enough left to overtake his younger, stronger successor.

“Maybe a year ago, Crist wasn’t fully into it and not the same guy he was early on,” said his a close friend who has known Crist since they went to school together. “But Crist has been working harder than I’ve ever seen him the last few weeks. He knows it comes down to purely what he puts into it.”

Sampras’ subpar year led to speculation about his future as balancing his personal and professional lives became more complicated. His drought began with his whirlwind engagement to New Yorker Carole Rome in the winter of 2008.