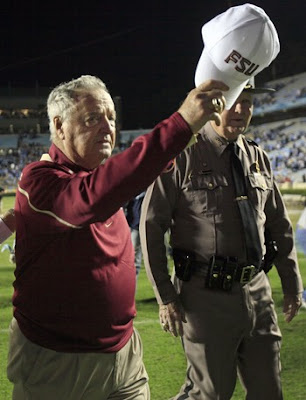 Bowden announced his resignation by way of a statement released Tuesday.

For additional stories about Bobby Bowden, please click “Read More” for an almost complete listing of all the stories written about Bowden’s retirement. Here are the latest:

Update – 5:57 p.m. – Once Bobby Bowden stepped down at FSU, commitments began picking up

Update – 5:25 p.m. – ESPN: Florida State has the two highest rated commitments in the country- and both pulled the trigger after Bowden retired.

Update – 5:22 p.m. – The most random yet super cool photo of Bobby Bowden, the Heisman trophy and Doak Stadium.

Update – 1:38 p.m. – Shabby Treatment: Bowden, who put Florida State football on the map, is shoved out the door by bosses

Update – 6:21 p.m. – Remembering Bobby Bowden’s career at Florida State: Sportswriters sound off from across the country

Update – 9:06 p.m. – Make no mistake: FSU just fired a legend without explaining why

Update – 8:11 p.m. – Florida coach Urban Meyer: “You’ll never see a guy [with the] wins he has, 300-something. He’s great for college football. I think him and Joe Pa, enjoy it because you won’t see that one again. At one school and that long a career in this day and age, you just won’t see it. You just admire a guy that had the stamina and did it the right way. That’s the thing you always admire about coach Bowden. He’s always done it the right way.”

Update – 6:50 p.m. – Florida Governor Charlie Crist: “Bobby Bowden is undoubtedly one of the greatest football coaches of all time. Throughout his career, Coach Bowden always led his team with heart and character. As a loyal ‘Nole, I think the world of him and wish only the best for him and his family. Florida State University’s football program has been blessed to have him as their coach for the past 34 seasons. God bless you, Coach!”

Update – 6:43 p.m. – Joe Paterno: “Bobby has been a tough competitor. He has meant an awful lot to the universities he coached and to the game of football overall.”

Update: 5:08 p.m. – Miami coach Randy Shannon: “He is college football. The respect is always going to be there. When you look at Coach Bowden, he was a man who always had a lot of integrity. No matter which coach it was at the University of Miami, you could always talk to him and have a good time with a man with a lot of wit, learn a lot from him.”

Update – 3:06 p.m. – Wetherell: “Bobby Bowden contributed in many ways to the overall success and advancement of a young and growing university.”

Uodate – 3:02 p.m. – “We knew what was happening … but to hear it out of his mouth was different,” Ponder said of Bowden’s meeting with the team.

Update – 9:01 p.m. – AP is quoting Ann Bowden, who says a decision has not been made and “that’s why they’re meeting tomorrow.”

Angry at the NFL players who refused to stand during the national anthem, about fifty people

Takeaways, thoughts and takedowns from Week 5 of the college football season. 1. As the fans

Angry at the NFL players who refused to stand during